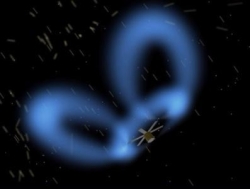 Someday fleets of interplanetary craft powered by the solar wind may cross the Solar System, using huge magnetic fields as their ‘sails.’ The concept is increasingly well understood, and I notice that researchers like Robert Winglee (University of Washington) have been extending it to include beamed propulsion methods as well (Winglee’s concept is called MagBeam), useful if your goal is to move deeper still into nearby space. But for all this to happen, we’ll need to learn much more about the solar wind itself and how we might ride it.

Image: Artist’s impression of a mini-magnetosphere deployed around a spacecraft. Plasma or ionized gas is trapped on the magnetic field lines generated onboard, and this plasma inflates the magnetic field much like hot air inflates a balloon. The mini-magnetosphere is then blown by the plasma wind from the Sun called the solar wind which has a speed of between about 350 to 800 km/s. Credit: Robert Winglee/University of Washington.

Enter NASA’s Solar Wind Experiment, flying aboard the Wind spacecraft launched in 1994, and designed to study such things as the stream of electrically charged particles constantly produced by the Sun. The Solar Wind Experiment can measure the speed, density and temperature of those particles. And it turns out to be particularly well placed for such work, according to John Steinberg (Los Alamos National Laboratory):

“We study the solar wind for practical reasons; the character of the solar wind blowing by Earth at any time determines conditions in the near-Earth space environment…It turned out that the Wind Solar Wind Experiment data were ideal for this particular study because of continuous data coverage that the spacecraft provided during the previous solar activity cycle minimum in 1996, through the recent solar max in 2001, and into the solar activity declining phase afterward.”

A key part of the analysis is to understand how the solar wind is accelerated to speeds between 600,000 and one million miles per hour. And it turns out that helium is implicated in the result. Most of the material in the solar corona is hydrogen, but as the hydrogen escapes the corona, it drags some heavier helium along with it, in the process slowing down.

But the huge events called coronal mass ejections show five to ten times the amount of helium normally found in the solar wind. Evidently helium building up in the solar atmosphere is suddenly expelled during these events. When the solar wind is at lower speeds, it is made up primarily of hydrogen, with little helium observed. Thus we have a lower speed limit established by the retardant effects of helium, with the coronal mass ejections showing what happens periodically to the helium that remains.

The paper is Kasper et al., “Solar Wind Helium Abundance as a Function of Speed and Heliographic Latitude: Variation through a Solar Cycle,” Astrophysical Journal 660 (May 1 2007), pp. 901-910 (abstract available).

Previous post: A Galactic Collision, and the Sun’s Future