Brown dwarfs, most of them unobserved, doubtless litter the galaxy. The more we can learn about them and their possible companions, the better for our understanding of how planets form and stars evolve. These minute ‘failed stars,’ far less massive than the Sun, cannot sustain hydrogen fusion, but they’re players in the exoplanet hunt. The brown dwarf 2MASS1207-3932, for example, has a planetary companion of five Jupiter masses, thought to be the first for which an image was obtained. 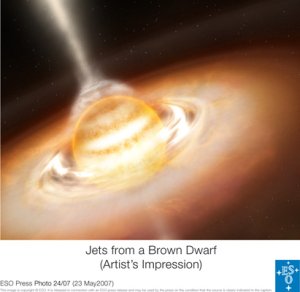 Now we learn that this young star, perhaps eight million years old and surrounded with a protoplanetary disc, is also producing jets of matter. The results, growing out of work at the European Southern Observatory’s Very Large Telescope, are surprising. The dwarf’s mass is itself only 24 times that of Jupiter, making it the smallest object known to produce such jets.

Image: Using ESO’s VLT, astronomers found jets coming out from a 24 Jupiter-mass brown dwarf, showing that outflows are rather ubiquituous in the universe and leading to the prospect that that young giant planets could also be associated with outflows. (c) ESO.

Jets are not uncommon in young T-Tauri stars, which are stellar infants that have not yet joined the main sequence. But detecting these relatively bright jets is a far cry from observing the faint signature coming from 2MASS1207-3932. Its jets stretch about a billion kilometers from the star, moving away from it at a speed of a few kilometers per second. Emma Whelan (Dublin Institute for Advanced Studies), lead author of the paper reporting on these events, is worth quoting on the matter:

“Discoveries like these are purely reliant on excellent telescopes and instruments, such as the VLT. Our result also highlights the incredible level of quality which is available today to astronomers: the first telescopes built by Galileo were used to observe the moons of Jupiter. Today, the largest ground-based telescopes can be used to observe a Jupiter size object at a distance of 200 light-years and find it has outflows!”

So now we can add brown dwarfs to the vast array of objects that produce outflows, from active galactic nuclei massing tens of millions of solar masses down to objects weighing only a few tens of masses larger than Jupiter. The paper is Whelan et al., “Discovery of a Bipolar Outflow from 2MASSW J1207334-393254 a 24 MJup Brown Dwarf,” The Astrophysical Journal Vol. 659, p. L45 (abstract available). One more quote from Whelan: “This leads us to the tantalizing prospect that young giant planets could also be associated with outflows.”