A Nanotech Comeback for Big Ideas

There was a time when images like that of the space station under construction below were standard issue for futurists. It seemed inevitable that after our first tentative orbital flights, we would quickly graduate to building an enormous platform above the Earth, using it as a base for a Moon landing as well as a research establishment in its own right, even a vacation getaway for the well-heeled. It would eventually be part of the supply chain that would create and support a colony on Mars. 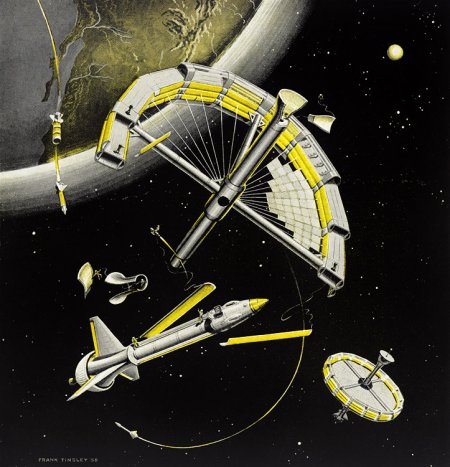 The Pastelogram blog featured this futuristic vision by Frank Tinsley recently, done as one of a series of ads that ran in 1958 and 1959 for defense contractor American Bosch Arma. From the ad copy:

New vistas in astronomy will be opened up by such a space station, because of perfect conditions for photography and spectroscopy. It will also provide unique conditions for advanced research in physics, electronics, weather prediction, etc. Three such stations, properly placed, could blanket the entire world with nearly perfect TV transmission. Atomic rocket vehicles with prefabricated skin layers provide building materials for the station, then return to Earth. Similar craft will service an established station, docking by electromagnetic pull exerted from lower section of the station’s axis. Inertial navigation systems will play an increasing role in the exploration of outer space. Arma, now providing such systems for the Air Force Titan and Atlas ICBMs, will be in the vanguard of the race to outer space.

Today, with thoughts of Mir and the International Space Station in our heads, space seems infinitely more constrained. But don’t give up on a future of large space constructs just yet. Watching a Babylon 5 episode last night, I mused that its “two million, five hundred thousand tons of spinning metal, all alone in the night,” though beyond the imagination of current industrial technique, might one day be spawned by nanotechnological methods given suitable raw materials.

Indeed, just as we’ve been adjusting to the idea of nanotechnology as a way to reduce payload sizes for possible interstellar missions, we might go on to think how the same techniques could rejuvenate some older notions. Robert Forward’s lightsail concepts, relying on sails a hundred kilometers in diameter and a Fresnel lens between the orbit of Saturn and Uranus that would have to be as wide as Texas, may start to look a little less dubious. How fast can nano methods, using countless smart assemblers, actually build such a lens to specification?

I have no idea, but as it is the business of the future to surprise us, it seems unwise to rule out such scenarios. Build a Forward-style lens in the outer Solar System and a powerful laser could take a probe to a tenth of lightspeed for a Centauri flyby, or as Forward envisioned, push a manned mission to Epsilon Eridani with return capability. It all comes down to the building of large structures in space, an idea that could be making a nanotech comeback that would gladden the hearts of 1950’s dreamers.