What better indication of the success of our planet hunting efforts than the news out of the American Astronomical Society’s annual meeting in Honolulu. There, the California & Carnegie Planet Search team announced at least 28 new planets, with four multi-planet systems among them and two borderline cases that need further investigation. That’s a bump of 12 percent in the number of known planets over the last year. Behold: 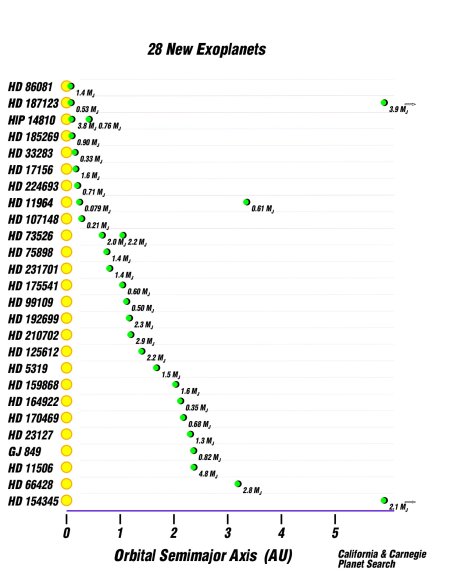 With the exoplanet count now not that far from 250, planetary discoveries are coming fast enough that a certain ennui seems to have settled in among press and public. Sure, Gliese 581 c was big news because we thought it was potentially habitable, but finding more and more gas giants probably won’t trigger the public imagination, even if GJ 436 b did cause a ripple because of the presence of water. That ripple lasted only long enough for scientists to explain what kind of water they were talking about. Here’s Geoff Marcy (UC Berkeley) on the subject:

“From the density of two grams per cubic centimeter – twice that of water – it must be 50% rock and about 50% water, with perhaps small amounts of hydrogen and helium. So this planet has the interior structure of a hybrid super-Earth/Neptune, with a rocky core surrounded by a significant amount of water compressed into solid form at high pressures and temperatures.”

Hard, hot, high-pressure water isn’t conducive to life and researchers have been quick to note that habitability is not an issue here. But it shouldn’t be neglected that a rocky place with high water content, discovered through a transit of a ‘hot Neptune,’ is an exciting reminder that the essentials for life are likely widespread. Marcy thinks about one in ten planets in our galaxy are habitable, which by his reckoning makes for around 20 billion conceivably living worlds in the Milky Way. 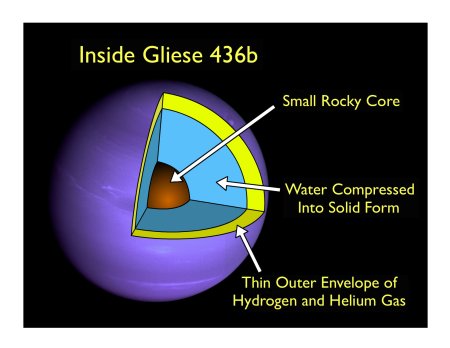 Image: The interior structure of the planet, Gliese 436 b. The core is probably composed of rock, including silicates, iron, and nickel. The envelope is probably composed primarily of water under high pressure (from the weight of material above it), and of smaller amounts of methane and ammonia. The density of the planet is 2.0 grams/cc, as determined from the planet’s mass (from Doppler measurements) and the diameter (from the dimming of the starlight as the planet transits in front of the star, blocking starlight). Credit: Jason Wright/California & Carnegie Planet Search.

The news release on these findings is here, containing John Asher Johnson’s interesting discoveries around A and F stars, with masses between 1.5 and 2.5 solar mass. Coupling his observations with earlier exoplanetary discoveries around older A stars, Johnson notes that planets around massive stars seem to orbit farther from their primary. “Only one of the 9 planets is within 1 AU (astronomical unit, or 93 million miles), and none of them is within 0.8 AU, of their host stars, which is very different than the distribution around sun-like stars,” Johnson said.

So it will be interesting to see what happens as this team works through the 450 older A stars it has added to its target list. Massive A stars like these normally rotate quickly and can mask the radial-velocity ‘signal’ of accompanying planets, which is why the team focuses on older A stars that have nearly completed hydrogen burning, a short period of stability that can reveal much about planetary companions. Large planets seem to show up more often around more massive stars, a trend that, if confirmed, seems to show the core accretion model of planetary formation at work, there being more disk material available early in the process.