My younger son Alec can be forgiven a certain amount of confusion over the term ‘Planet X.’ Back in the 1980s, I told him all about the marvelous Edgar G. Ulmer film The Man from Planet X, a favorite since my own childhood. Ulmer was a gifted director who is rarely talked about today (see his 1945 film Detour for a glimpse of just how gifted). And 1951’s The Man from Planet X was compelling in a way that few B movies of the era achieved, with an alien whose spooky presence has stuck with me ever since I first saw him on an old black-and-white set. 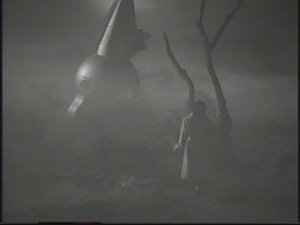 But then Alec encountered a different ‘Planet X’ in an astronomy class, learning that some astronomers had searched for a planet beyond Pluto, although at that point with notable lack of success. Planet X was supposed to account for various orbital oddities exhibited by Pluto and become emblematic of a fabulous, unknown place at the very edge of the system that was the ultimate catch for the next Clyde Tombaugh. I didn’t think it existed until Mike Brown came along.

Image: Actress Margaret Field approaches the alien vessel amidst a fine Scottish fog in Edgar G. Ulmer’s The Man from Planet X. Ulmer worked with the smallest of budgets but created suspense as much by what he didn’t show as what he did.

Brown, an astronomer at the California Institute of Technology, identified the world we’ve come to know as Eris, a place larger than Pluto and on an even more eccentric orbit well off the ecliptic. No wonder it took so long to find it. And just when we thought we had a real Planet X, my son was told that it wasn’t a planet at all. Oddly, finding an object larger than Pluto only reinforced the growing belief that Pluto itself was just one of many (perhaps hundreds, perhaps thousands) of large Kuiper Belt objects. The IAU made it official and now we have just eight planets.

“This was Pluto’s last chance to be the biggest thing found so far in the Kuiper belt. There was a possibility that Pluto and Eris were roughly the same size, but these new results show that it’s second place at best for Pluto.”

The data tell us that Eris is made up of ice and rock, thus similar to Pluto in composition. It’s bound to be a dark and lonely place, currently 97 AU from the Sun and sporting temperatures below -240 degrees Celsius. That orbit will eventually swing back around, highly elliptical as it is, to bring Eris within 38 AU, but right now it’s pretty much at aphelion, orbiting along with its moon Dysnomia in the outer dark. A fine, interesting object, but no longer fit to be declared a planet.

Sigh. The Man from Planet X has not, to my knowledge, made it onto DVD, but I managed to acquire, some ten years ago, a good videotape of it, and I was delighted to find that it has worn well over all the years. Sure, it’s schmaltzy and over-acted and it makes its points a little too heavily, but this is a B movie, remember? And the sets, the lighting, the fog over the Scottish moors where the odd glow of the alien craft can be seen at night, these are things that, to this day, put a chill up my spine.

Eris isn’t Planet X, but then we’re discovering plenty of worlds around other stars that should prove even more interesting. And as for the might-have-been Planet X, the new paper is Brown and Schaller, “The Mass of Dwarf Planet Eris,” Science Vol. 316, No. 5831 (June 15, 2007), p. 1585 (abstract available).