A Possible Planet around Fomalhaut

Watching the motion of the stars they orbit has been how most of the planets beyond our Sun have thus far been discovered. Such radial-velocity methods are getting more precise all the time, but a likely planet around the nearby star Fomalhaut comes out of an entirely different line of research. Alice Quillen (University of Rochester) is an expert on stellar disks and the planets that help to shape them. And she has learned to predict a planet’s size and position from her studies.

In the case of Fomalhaut, Quillen worked with Hubble Space Telescope imagery showing the star’s surroundings in greater detail than ever before. The Hubble images took advantage of a coronagraph to mask the light of the star to bring out detail in the dimmer ring, confirming what astronomers had previously noted — Fomalhaut is off-center within its ring. 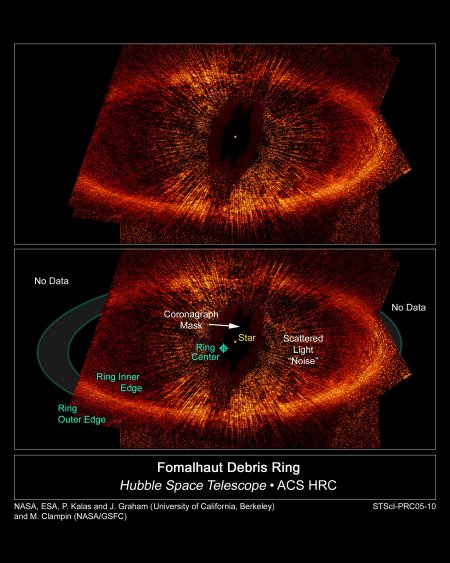 Quillen’s models examine ring/planet interactions for young stars, around which the dust is fine enough to act much like a fluid, and older stars where larger bodies have begun to form. The Fomalhaut offset, more than 15 times the distance between Earth and the Sun, suggests a hidden planet in a highly eccentric orbit. Quillen has this to say:

“Something had to skew that planet, and that’s what we’re working on now. There may have been fantastic planetary collisions early on that changed their orbits. We’re working on figuring out how many more planets of what size you’d need to account for that elliptical orbit, and to account for why there is no other dust inside that ring.”

We won’t know for sure whether Quillen and team are right until we’ve got the tools to make an actual detection. At 25 light years from Earth, Fomalhaut is likely to receive detailed study by coronagraph or starshade technologies on future planet-hunter missions. But don’t be surprised if a Neptune-class world fitting Quillen’s increasingly fine-tuned model turns up in the system there. Up tight against the inner side of the ring, its presence would explain nicely how ring dust is being so clearly displaced.

The paper is Hosseinbor, Quillen et al., “The formation of an eccentric gap in a gas disc by a planet in an eccentric orbit,” Monthly Notices of the Royal Astronomical Society (OnlineEarly Articles), with abstract available.