The Colors of Exobiology

Speaking of bio-signatures, as we did at the end of yesterday’s post on planetary atmospheres, take note of the Virtual Planet Laboratory, a working group at the Jet Propulsion Laboratory that is trying to figure out what life’s markers might look like across a wide range of biological types. The most obvious signature for life itself is the presence of unusual combinations of things. A world without life shouldn’t, for example, give us strong signatures in both methane and oxygen simultaneously.

We looked at this subject in an April post, but a recent news release prompts me to put it back into play. The work is highly theoretical, proceeding as it does with no current examples of extrasolar planetary spectra from terrestrial-class worlds to look at. But we can begin with photosynthesis and its variants, as discussed here by Robert Blankenship (Washington University, St. Louis), a member of the group of researchers:

“When you consider another world you’ve got to find that life there depends on photosynthesis in the broad sense, but it’s probably not identical to the way that photosynthesis works here. You’ll need molecules that absorb light that are highly colored, but whether they have the same green colors we know on Earth is unlikely.”

Plants that are black instead of green? Blankenship thinks they’re possible. It’s wonderful to think about what Chesley Bonestell might have come up with to illustrate such concepts, but Doug Cummings’ work below handles odd foliage colors nicely. And Blankenship points out that chlorophyll isn’t as efficient as it might be in harnessing light’s energies. A black molecule could absorb all the ambient light, depending on the spectrum of light impinging on the planetary surface. The size and intensity of the star in question obviously become key players here. 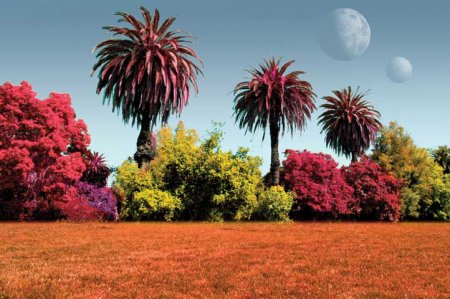 “Apparently the vegetable kingdom in Mars, instead of having green for a dominant colour, is of a vivid blood-red tint,” wrote H.G. Wells in The War of the Worlds, an 1898 novel whose landscape speculations now can be extended to other solar systems, Mars having failed in the vegetation department. In a recent paper, the researchers speculate that among the best candidates for the study of biomarkers are M-class stars, red dwarfs like Barnard’s Star, Proxima Centauri and the widely touted Gliese 581:

Biosignatures — both atmospheric and surface — on planets around M stars may actually be easier to detect than those around F, G, or K stars. The modeled atmospheres of M star planets of Segura, et al. (2005) reveal that low UV radiation from quiescent M stars could result in higher concentrations of biogenic gases CH4, N2O, and CH3Cl. Tinetti, et al. (2006) found the “red edge,” shifted to the NIR, to be easier to detect through modeled clouds than the plant red edge. These prospects to detect life should motivate continued investigations into M star atmospheres and the spectral adaptations of extrasolar photosynthesis.

The ‘red edge’ in question can be helpful because as you push into the near-infrared (NIR), chlorophyll becomes much more reflective (this begins at wavelengths in the area of 700 nm and greater). Thus foliage can throw an interesting signature at these wavelengths, telling us that there is a method of light capture and energy storage at work on a distant world. The same paper cited below also goes into M star flare activity and its effects on plants pushing into deeper water for flare protection.