Ceres, Vesta and the Dawn Mission

With launch of the Dawn mission to Ceres and Vesta coming up on July 7, NASA has announced a news conference for next Tuesday, the 26th, to discuss details of the four year journey to the asteroids. Held at NASA headquarters, the event is due to be streamed on the agency’s homepage. The Hubble Space Telescope, meanwhile, has provided these images, shown below as a montage, of the two target asteroids. The debris of the asteroid belt, which may house 100,000 or more asteroids as large as ten kilometers across, provides an idea of the kind of materials available for planet-building some 4.6 billion years ago. 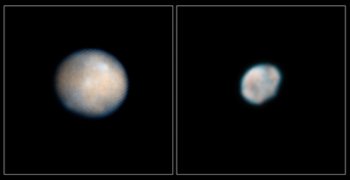 For those who follow robotic missions with fascination for the rapid strides in technology they represent, consider that Dawn is the first mission sent to orbit two different targets. Vesta will be the first, in 2011, with Ceres following in 2015. The Vesta image (on the right) shows the asteroid’s southern hemisphere, which is dominated by an impact crater so large that the distance across it is almost equal to the asteroid’s diameter. About the size of Arizona, Vesta produced fifty smaller asteroids from the impact that are often referred to as ‘vestoids.’

Image: These Hubble Space Telescope images of Ceres and Vesta show two of the most massive asteroids in the asteroid belt, a region between Mars and Jupiter. The images are helping astronomers plan for the Dawn spacecraft’s tour of these hefty asteroids. Credit: For Ceres, NASA, ESA, and J. Parker (Southwest Research Institute). For Vesta, NASA, ESA, and L. McFadden (University of Maryland).

Ceres, seen on the left, shows the presence of dark and bright regions probably related to topographic features. The small world is thought to hold thirty to forty percent of the mass in the asteroid belt, with water possibly occurring beneath its surface. Or maybe we should call this a ‘dwarf planet,’ as planet-definers like the IAU prefer to do. Ceres is round and thus planet-like, but it does not sweep debris out of its orbit. However we describe it, this first asteroid to be discovered (in 1801) should tell us much about asteroid structure, and the comparison with New Horizons data from Pluto may help us decide whether the ‘dwarf planet’ category is sufficient to cover both of these small worlds.