Water Vapor on a Hot Jupiter

Probing planetary atmospheres is tricky business at the best of times, but when you’re limited to planets you can’t even see, the project seems well nigh insurmountable. Nonetheless, astronomers using the Spitzer space telescope are having some success working in the infrared. They focus on transiting hot Jupiters, and earlier this year were able to obtain spectra of exoplanetary light from two such worlds, HD 189733b and HD 209458b.

We discussed that work earlier and noted that no water vapor was found in the atmosphere of either planet, despite earlier predictions that it would be. Now a team led by Giovanna Tinetti (Institute d’Astrophysique de Paris) has made further observations of HD 189733b, studying changes in the infrared light from the star as the planet transits, and thus filters the light through its own planetary atmosphere. Working at three different wavelengths, the study showed the clear signature of water. 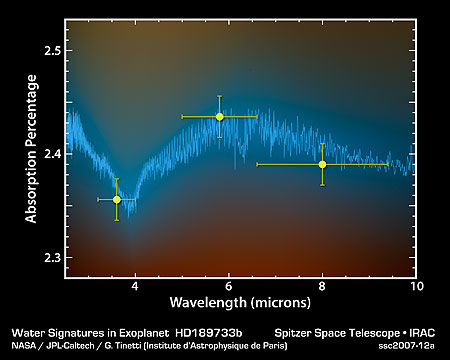 Image: This plot of data from NASA’s Spitzer Space Telescope tells astronomers that a toasty gas exoplanet, or a planet beyond our solar system, contains water vapor. Spitzer observed the planet, called HD 189733b, cross in front of its star at three different infrared wavelengths: 3.6 microns, 5.8 microns, and 8 microns (see lime-colored dots). For each wavelength, the planet’s atmosphere absorbed different amounts of the starlight that passed through it. The pattern by which this absorption varies with wavelength matches known signatures of water, as shown by the theoretical model in blue. Credit: ESA, NASA/ JPL-Caltech/G. Tinetti (Institute d’Astrophysique de Paris, University College London).

“Water is the only molecule that can explain that behavior,” said Tinetti. “Observing primary eclipses in infrared light is the best way to search for this molecule in exoplanets.”

By ‘primary eclipse,’ Tinetti refers to the planet crossing directly in front of the star. The earlier Spitzer work on HD 189733b and HD 209458b was performed during ‘secondary’ eclipses when the planets moved back behind their stars after the transit. Tinetti clearly believes the primary eclipse is the way to go, a thought backed by visible-light studies of HD 209458b, in which astronomers using the Hubble Space Telescope found hints of water there by studying the planet during a primary eclipse.

But clearly, that water is not liquid. The average temperature on HD 189733b is, at best estimate, 1000 Kelvin (1340 degrees Fahrenheit, or 727 degrees Celsius). We’re talking about a planet that orbits its star in a mere two days. Even so, this hot Jupiter, some 63 light years away in the constellation Vulpecula, may be telling us that water is as abundant in at least one other solar system as it is in our own. And that finding may one day extend to smaller rocky worlds around stars like this one.