An obvious objection to the idea of human journeys to the stars is time — if we can’t find ways to reduce travel time to well within a human lifetime, so the thinking goes, then we’ll have to stick with robotics. But expand the timeframe through multi-generational ships and you change the parameters of the debate. The notion of a multi-generational ‘worldship’ whose crewmembers have long forgotten their actual circumstance is a classic trope of science fiction, with obvious references like Robert Heinlein’s story “Universe” (1941), later reprinted in Orphans of the Sky, and Brian Aldiss’ Non-Stop (1958), published in the US as Starship. 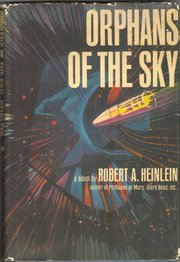 But maybe such a crew wouldn’t forget where it was going. For that matter, would the people aboard a true worldship, one that took, say, 5000 years to make the average interstellar crossing, really consider themselves a crew? They might prefer the term ‘inhabitants’ when describing themselves, because they would be living inside a structure so vast and commodious that it would simply have become a home. By the time they reached their destination, they might well decide to study it for a few generations and then move on to the next distant world.

All of which depends, of course, on our ability to build vast structures in space, huge living worlds that take their inspiration from Gerard O’Neill’s colonies, on which entire ecosystems could flourish. Such mega-engineering is hard to imagine if you’re thinking in terms of 20th Century technologies, but by the end of this century, molecular nanotechnology could conceivably be applied to the task, turning fields of building material like the asteroid belt into workable structures. If off-planet living becomes a serious option, then generations accustomed to living aboard enormous space colonies will surely find among their number some who decide to make the interstellar journey, even if thousands and thousands of years are involved.

Michael Anissimov discusses space colonization in terms that relate to this in a fascinating post on his Accelerating Future weblog. Noting Marshall Savage’s projection that the asteroid belt could theoretically house 7,500 trillion people if exploited in its entirety (this is drawn from the latter’s The Millennial Project), Anissimov goes on to ponder the motivations for space exploration itself. Here’s one relevant bit:

Why expand into space? For many, the answers are blatantly obvious, but the easiest is that the alternatives are limiting the human freedom to reproduce, or mass murder, both of which are morally unacceptable. Population growth is not inherently antithetical to a love of the environment – in fact, by expanding outwards into the cosmos in all directions, we’ll be able to seed every star system with every species of plant and animal imaginable. The genetic diversity of the embryonic home planet will seem tiny by comparison.

Thus one model for interstellar colonization. Rather than building a starship capable of carrying a tiny crew to another star in less than a century, we first turn to exploiting the resources of our own Solar System. Eventually we make a wide variety of space-based habitats available, where colonies of all sizes and descriptions can flourish. Our expertise with nanotech engineering will teach us how to make the most of the abundant resources we have within reach of our planet. At some point, pushing ever deeper and farther out, we may well see the first enterprising colonists depart Sol forever.

Of course, such a perspective demands a different view of time than anything we’re familiar with today. Those of us who believe our expansion into the stars is inevitable also know that the time scale is unknowable. The one thing we can predict with certainty is that it will take the efforts of generations to build the necessary base for such journeys, and to put the technologies available at each step of the way to wise use. Worldships are only one possible outcome of this work, but the reason Centauri Dreams supports continuing research into all aspects of interstellar flight is that building that base is critical if we ever hope to make the interstellar vision a reality. Ad astra incrementis.