Astronomers have found a highly elliptical debris disk around the star HD 15115, one that seen virtually edge-on from Earth gives the appearance of a needle running straight through its star. The disk was first imaged by the Hubble Space Telescope in 2006, its unusual shape causing astronomers to request near-infrared imaging by the W.M. Keck Observatory in Hawaii. Keck’s images, in conjunction with the Hubble data, revealed the disk’s uncommon blue color. 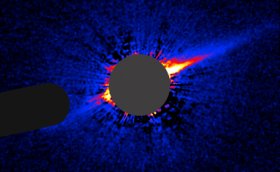 So what’s going on around this F-class star? First of all, let’s distinguish between protoplanetary disks, which give birth to planets, and debris disks like this one, which resemble our own Kuiper Belt. The latter are made up of the remnants of planetary formation. This debris disk seems to extend some ten times further from its star than the Kuiper Belt, according to a Keck news release, though our limited knowledge of the Kuiper Belt makes me a bit wary of the statement, as the latter’s dimensions are still under active investigation.

Image: Dust orbits in a needle-shaped ring around the star HD 15115 in this Hubble Space Telescope image. An occulting mask was used to block out bright starlight. The masks can be seen in the image as the dark circle in the center and the dark bar on the left. Credit: NASA\ESA\UC Berkeley.

But a debris disk in a highly elliptical orbit is an oddity no matter what its extent. One intriguing possibility is the influence of the star HIP 12545, some ten light years away from HD 15115. A close pass at some point in the past? Perhaps, because both stars seem to be part of the Beta Pictoris Moving Group, an expanded cluster of stars thought to have a common birthplace and age that are moving together through space.

The paper on this work cites evidence for the stellar flyby idea, from which this excerpt:

This geometry is consistent with the dynamical simulation of a disk disrupted by a stellar ﬂyby… [T]he long end of a highly perturbed disk is located in the direction of periastron. The perturber follows a parabolic trajectory such that in a later epoch it is located in the direction opposite of periastron, or in the direction of the truncated side of the disk. Periastron in these models is ∼700 AU, with an initial disk radius of ∼500 AU. Overall, the ensemble of evidence favors further consideration of HD 15115 and HIP 12545 as a possible wide-separation multiple system with a highly eccentric orbit (e > 0.95).

It is also notable that the debris disk around HD 15115 shows significantly less dust than disks observed around three other stars in this group. Paul Kalas (UC-Berkeley), lead author of the paper, thinks the missing matter is connected to the disk’s elliptical shape, saying “The missing mass is quite interesting. Perhaps the mechanism which perturbed the disk into its current asymmetric morphology also shaved away a significant fraction of the mass.” Kalas plans further work on both stars this fall, using Keck’s adaptive optics. It will be interesting to see whether HIP 12545, a M-class red dwarf, has a disk of its own.

A second hypothesis to account for the disk’s odd shape is closer to home: Disturbances caused by planets near the star. Here the obvious analogue is not only Neptune’s influence on Kuiper Belt objects but the theory that Neptune may originally have formed inside the orbit of Saturn and Uranus, only to be pushed to its present position by gravitational disturbances as the orbits of Jupiter and Saturn stabilized. Whether true of Neptune or not, profound planetary upheaval of this magnitude could also explain the disk asymmetry around HD 15115.

The paper is Kalas et al., “Discovery of extreme asymmetry in the debris disk surrounding HD 15115,” accepted by Astrophysical Journal Letters and available as a preprint. The team plan to present a more detailed analysis of dust scattering and thermal emission around this star in a future paper.

Addendum: Curious about the stellar flyby scenario and the stability of the debris disk around HD 15115, I wrote Dr. Kalas. Here is part of his response:

The stellar flyby hypothesis that we invoked as one possible explanation is extremely rare and the effects are short-lived (<1 Myr). Since 1 km/s = 1 pc / Myr, and the present separation is ~3 pc between HD 15115 and the suspected perturber, the perturber must have passed by HD 15115 by at least 3 km/s, which is not implausible, and which can be tested by future observations.

Dr. Kalas also provided this link to his earlier work on the stellar flyby model and asymmetric disk environments.