Liquid Water in the Kuiper Belt?

As if New Horizons didn’t already have its work cut out for it, now we have the possibility of seeing a frigid geyser going off on Pluto’s companion Charon when the probe arrives in 2015. The process is called cryovolcanism, the movement of liquid water onto the surface where it freezes into ice crystals. New high-resolution spectra obtained at the Gemini Observatory (Mauna Kea) show ammonia hydrates and water crystals spread patch-like across the surface of the distant world.

The suggestion is that liquid water mixed with ammonia is pushing out from deep within Charon, leading to an interesting conclusion. Thus graduate student Jason Cook (Arizona State), who led the team surveying Charon’s surface:

“Charon’s surface is almost entirely water ice. So it must have a vast amount of water under the surface, and much of that should be frozen as well. Only deep inside Charon could water be a liquid. Yet, there is fresh ice on the surface, meaning that some liquid water must somehow reach the surface. The ammonia sitting on the surface provides the clue. It’s the ammonia that helps keep some material liquid. It makes it all feasible. Without ammonia the water could not get out there.” 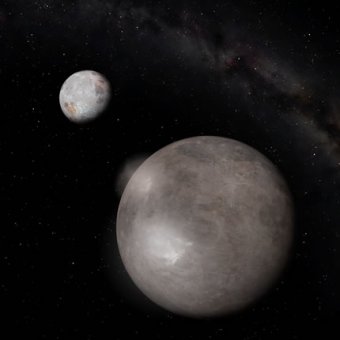 Start adding up the other places in the Solar System where cryovolcanism is a factor and the list quickly grows. The Uranian moon Ariel, based on Voyager 2 imagery, may well be undergoing the process, and we’ve already seen evidence of water ice reaching out from beneath the surface of Enceladus. Europa, too, shows evidence of water upwelling from within. But unlike these examples, Kuiper Belt Objects like Charon, Quaoar and others are not tidally squeezed (Charon is tidally locked to Pluto). Thus the presence of cryovolcanism has implications for what New Horizons may find elsewhere in the Kuiper Belt.

Image: An artist’s conception of Charon with Pluto in the background. The plumes and brighter spots depicted at left on Charon are thought to be created as water (with some ammonia hydrate mixed in) “erupts” from deep beneath the surface. The material sprays out through cracks in the icy crust, immediately freezes and snows crystalline ice down onto the surface, creating a water-ammonia hydrate ice field. Credit: This composite image includes Pluto and Charon models (enhanced), courtesy of Software Bisque. www.seeker3d.com, with plumes and ice fields added by Mark C. Petersen, Loch Ness Productions. Star field from DigitalSky 2, courtesy Sky-Skan, Inc.

Quaoar, in fact, is possibly laden with ammonia hydrate, a form of ammonia suspected on other KBOs including Charon. Its presence is helpful in this frigid scenario, because ammonia hydrates keep liquid water from freezing solid, making its escape from an inner reservoir to the surface that much easier. Evidence for ammonia hydrates on Charon builds the case for their proliferation in the Kuiper Belt. Says Steven Desch, Cook’s thesis advisor at Arizona State:

“It had been tentatively identified on Charon before by other groups, but the lack of spectral resolution hindered its identification. This clinches it. These spectra are also better than those of other KBOs. I’ve talked to seasoned observers who are convinced for the first time that ammonia hydrates exist on KBOs.”

The possibilities are refreshingly open. From what we know so far, Charon seems rather typical of Kuiper Belt objects. The Gemini observations open the door for reservoirs of water deep beneath the surface of many such objects. Cook believes that if Charon holds an ocean, then all Kuiper Belt objects greater than 500 kilometers across may well have them. There could, in short, be more liquid water — perhaps a lot more — in the Kuiper Belt than on Earth.