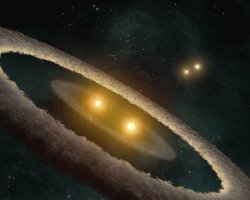 HD 98800 is an unusual system indeed. About 150 light years away in the constellation TW Hydrae, the four stars that make it up consist of two binary pairs that circle each other. The distance between the two pairs is about 50 AU, which is roughly the average distance between Pluto and the Sun. Imagine having, instead of icy Kuiper Belt objects, a binary star system at the edge of our Solar System. Note: The reference above should probably be to the TW Hydrae association, not ‘constellation,’ as noted in the comments below.

Image: This artist concept depicts the quadruple-star system HD 98800. The system is approximately 10 million years old, and is located 150 light-years away in the constellation TW Hydrae. HD 98800 contains four stars, which are paired off into doublets, or binaries. The stars in the binary pairs orbit around each other, and the two pairs also circle each other like choreographed ballerinas. Credit: NASA/JPL-Caltech/T. Pyle (SSC-Caltech).

The idea of planet formation here may not be completely far fetched, because HD 98800B, one of the binary pairs, has a dusty disk around it. The evidence coming in from the Spitzer Space Telescope shows that the disk is actually made up of two belts, one at about the distance from the Sun to Jupiter, the other at around 1.5 to 2 AU (think of Mars and the asteroid belt in our own system). If planets did form here, we could certainly wind up talking about some interesting orbital mechanics. But the evidence is hardly complete. Says Elise Furlan UC-Los Angeles):

“Typically, when astronomers see gaps like this in a debris disk, they suspect that a planet has cleared the path. However, given the presence of the diskless pair of stars sitting 50 AU away, the inward-migrating dust particles are likely subject to complex, time-varying forces, so at this point the existence of a planet is just speculation.”

Speculation indeed. The paper on this work zeroes in on the factors involved, noting that the object under study appears to be a debris disk rather than a protoplanetary disk in the process of formation. As to the gravitational perturbations of the second binary pair:

This type of perturbation can pump up eccentricities and inclinations of particles, and cause particles to be trapped in mean motion resonances, as was likely the case for Kuiper Belt objects under the inﬂuence of the giant planets and possibly a close encounter by a passing, nearby star. Periodic stirring of planetesimals in the outer disk around HD 98800 B by the A pair could be responsible for generating copious amounts of dust. HD 98800 B is thus a unique type of debris disk, whose infrared excess is elevated to levels comparable to that of protoplanetary disks due to the particular conﬁguration of the four components in this system, resulting in gravitational perturbations that prevent the dust from settling into a ﬂat disk.

So that second binary pair 50 AU away complicates the picture considerably. Dust particles migrating to the inner disk following outer system collisions between rocky objects should produce a relatively continuous disk unless perturbed. We’re either seeing the beginnings of a planetary system, with the new planets clearing out debris in their orbital path, or we’re finding gaps created by the complex gravitational pull of the four stars in this curious system. Or perhaps both? Spitzer’s infrared spectrometer can give us that much, but to this point not much more.

As we find more binary and multiple systems with planets, we’re learning how complicated the process of disk formation in these environments can be. The paper is Furlan et al., “HD 98800: A 10-Myr-Old Transition Disk,” accepted by the Astrophysical Journal and available online.