A Frigid Enceladus After All

We always knew the surface of Enceladus was cold, but those tantalizing plumes breaking out of the Saturnian moon’s south polar region gave hope of warmer things within. Liquid water fits with one model, pockets of which could account for the occasional geysers of ice crystals mixing with methane, nitrogen and carbon dioxide that Cassini has measured. Fill Enceladus with an internal ocean and the possibility of some kind of biology becomes an attractive study.

But an alternate take on the plumes has been on view for some time now. Coming out of the University of Illinois, it’s based on the idea that stiff compounds of ice called clathrates may cover Enceladus to a considerable depth. Whereas the warm interior model could produce such geysers, coined ‘Cold Faithful’ out of analogy to Yellowstone National Park’s Old Faithful geyser, so could the clathrate model. But the latter, dubbed ‘Frigid Faithful,’ could operate far below the freezing point of water, with obvious implications for the possibility of life. 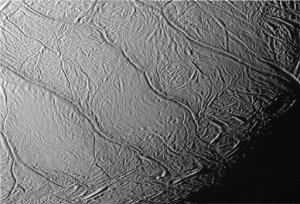 Indeed, if Susan Kieffer and Gustavo Gioia are right, their approach does a better job of accounting for what Cassini sees in the ‘tiger stripes’ region of Enceladus, where large and evidently deep fractures wound the terrain. A mild heat source (perhaps only a few tens of degrees warmer than the surrounding shell) could cause the clathrates above to become expanded and stretched. Tensile stresses become compressive, forming the ridges that encircle the tiger stripes, and then tensile again, forming further fractures that radiate northwards.

Image: The ‘tiger stripes’ of Enceladus’ south polar region. Does liquid water lurk below this surface, or can the ‘Frigid Faithful’ model explain the plumes Cassini has observed without it? Credit: NASA/JPL/Space Science Institute.

According to this model, the tiger stripes should be about 35 kilometers deep. Clathrates on their cracked surfaces would undergo decompression and dissociate explosively, thus exposing more clathrates to decompression and so on. Gaseous plumes transport heat to the surface, but this is a kind of heat advection that can take place at a nearly uniform temperature. Says Gioia, “This is indeed a frigid Enceladus. It appears that high heat fluxes, geyser-like activity and complex tectonic features can occur even if moons do not have hot, liquid or shifting interiors.”

The paper is Gioia et al., “Unified model of tectonics and heat transport in a frigid Enceladus,” Proceedings of the National Academy of Sciences (published online in advance of the print edition, with abstract here).