Can Titan Keep Its Atmosphere? 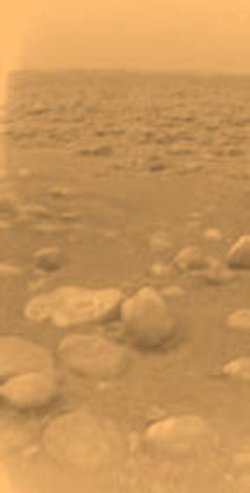 With the European Planetary Science Congress now in session in Potsdam, we should have several interesting presentations to discuss this week, the first of which involves Titan. Huygens and Cassini have shown us a frigid, rocky surface under a surreal orange cloud of hydrocarbons, a place where liquid methane seems to flow in lakebeds and rivers. Methane in these circumstances plays much the same role that water plays here on Earth.

Image: The surface of Titan as seen by the Huygens probe. Credit: ESA/NASA/JPL/University of Arizona.

But what’s under that interesting surface? The permafrost crust seems to sit on a soggy layer of ammonia, methane and water, beneath which an icy layer should surround a rocky core. It’s that icy layer that interests Vasili Dimitrov (Tel-Aviv University), who is discussing its nature at the Potsdam conference. Dr. Dimitrov is hoping to put limits on the methane reserve available within Titan, which will tell us, among other things, whether that thick atmosphere can be retained indefinitely.

For methane poses problems over the long haul. Says Dimitrov:

“If Titan runs out of methane and loses its ‘veil’, it will become a completely different type of astrophysical body. Methane drives the chemical reactions in Titan’s atmosphere but, because it’s so highly reactive and therefore short-lived, it must be replenished. We need to find out just how much methane is stored in the primordial reserve in Titan’s interior at a level where it can escape to the surface. To do this, we need to know how efficiently the methane molecules were packed away when the reserve formed.”

Answering these questions invokes the issue of clathrates, the molecular structures within which the trapped methane must exist in this icy internal environment. We’ve run into clathrates repeatedly as scientists have tried to figure out the geyser mechanism on Enceladus. Now we learn that they’re critical to Titan’s future as well, because the efficiency of methane packing in the clathrate molecular structure tells us whether enough was created during the moon’s early history to keep its atmosphere viable. What’s needed, says Dimitrov, is more experimental work on the nature of methane transfer between Titan’s various internal layers.

Also needed is a better description of Titan’s accretion and evolution, a project that is clearly going to take time, though Cassini-Huygens data should continue to clarify the picture. Optimal efficiency for the trapped methane would occur only if the clathrates formed slowly at temperatures close to absolute zero. Learning more about Titanian clathrates, then, may give us clues about the earliest history of this enigmatic world.