A New View of Uranus’ Rings

We’re used to astronomical phenomena being relatively stable over the course of a human lifetime, which is why unexpected activity catches the eye. Think of the surprise over Io’s volcanoes when they were first revealed by Voyager. And now we learn that the ring system around Uranus has changed significantly since Voyager 2 photographed it some twenty-one years ago. The inner rings have become more prominent, showing dusty material moving in otherwise empty regions of the rings.

So reports Imke de Pater (UC-Berkeley), who led the team of astronomers investigating these changes, and presented the results at the European Planetary Science Congress today in Potsdam. Says de Pater of the activity:

“People tend to think of the rings as unchanging, but our observations show that not to be the case. There are a lot of forces acting on small dust grains, so it is not that crazy to find that the arrangement of rings has changed.”

Assisting the investigation is the edge-on view we now have of the Uranian rings, one that only becomes available every forty-two years. Since the rings were only discovered in 1977, this was the first observational opportunity astronomers have had to study a ring crossing. The Berkeley team used the near infrared camera and adaptive optics on the Keck II telescope, capturing images in which the rings stand out as a bright line against a Uranus that appears dark in the infrared. 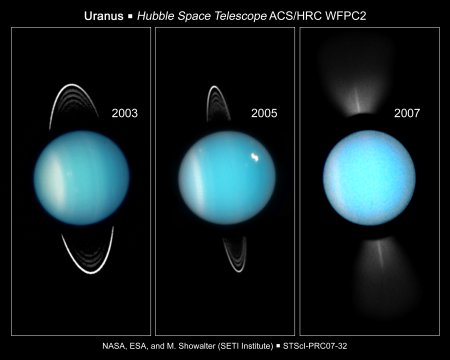 Image: This series of images from NASA’s Hubble Space Telescope shows how the ring system around the distant planet Uranus appears at ever more oblique (shallower) tilts as viewed from Earth – culminating in the rings being seen edge-on in three observing opportunities in 2007. The best of these events appears in the far right image taken with Hubble’s Wide Field Planetary Camera 2 on August 14, 2007. Credit: NASA, ESA, and M. Showalter (SETI Institute).

With the rings edge-on, a host of new observations becomes possible. The team hopes, for example, to detect some of the shepherding moons that adjust the shape of the debris into distinct rings, and perhaps find some new ones.

“Two little satellites called Cordelia and Ophelia straddle the brightest ring, the epsilon ring, and keep it in place, but people have always assumed there must be a bunch more of these satellites that are confining the nine other narrow rings,” says Mark Showalter (SETI Institute), a co-author of the paper on this work. “This is the unique viewing geometry that only comes along once in 42 years, when we have a chance of imaging these tiny satellites, because normally they are lost in the glare of the rings. Now, the rings are essentially invisible.”

That ‘invisibility’ occurs as the brighter outer rings grow faint while their centimeter to meter-sized rocks obscure one another. At the same time, the inner rings, normally dim, become brighter as their dusty materials form a compact band along the line of sight.

But what about those changes since the time of the Voyager flyby? They all seem to involve adjustments in dust distribution. The inner ring called zeta is now several thousand kilometers farther from the planet than when first discovered (“The ring may have moved, or it may be an entirely new ring,” says Showalter). Among the factors in these changes: Pressure from sunlight, drag as ring dust moves through ionized plasma around Uranus, and drag from the planet’s magnetic field. All this occurs at the same time that gravity tends to keep the larger ring particles stable, yielding the internal changes we observe.

The paper is de Pater et al., “The Dark Side of the Rings of Uranus,” published online by Science Express August 23, 2007 (abstract).