Jupiter’s protective role for Earth has long been assumed, the theory being that the giant planet deflects asteroids and comets away from the inner Solar System. But studies on the subject are sparse, and focus on long period comets in extremely elliptical orbits. What about short period comets, and in particular the Jupiter Family of Comets (JFC)? These are comets thought to originate in the Kuiper Belt whose orbits are now controlled by Jupiter. Comet 81P/Wild 2, encountered by Stardust, was one of these, as was Comet Shoemaker Levy-9. 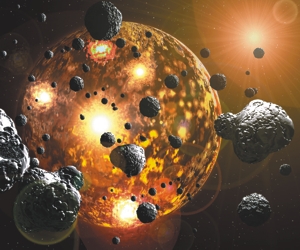 We all saw in 1994 what a planetary impact from a comet could do when Shoemaker Levy-9 struck Jupiter. And a new study suggests that Jupiter’s presence offers Earth no real protection from such objects. A research team at the UK’s Open University set up computer models that examined the Jupiter Family, defined for these purposes as comets whose semi-major axes are smaller than Jupiter’s and whose orbital period is less than twenty years. Some studies indicate that the so-called ‘Centaurs,’ icy objects which cross the orbits of the giant planets, are in transition between the Kuiper Belt and the Jupiter Family of Comets.

Image: Heavy bombardment. The role of Jupiter in slowing its pace is now being reassessed. Credit and copyright: Julian Baum.

Assuming the Centaurs as the parent population for the JFCs, the team set up a computer simulation that could track 100,000 Centaurs around the Solar System over a period of 10 million years. The model’s parameters were first adjusted to include a Jupiter at current mass, and the model was then run with planets at three-quarters, one-half, and one-quarter the mass of Jupiter. A final simulation was run with no planet in Jupiter’s position at all.

The result: The cometary impact rate with Jupiter in place is comparable to the rate when no planet exists in that position at all. What does change the rate of impacts is to assume a Jovian mass between these two extremes, in which case the rate goes up. Jonathan Horner (Open University), who presented these results at the European Planetary Science Congress in Potsdam today, has this to say:

“We’ve found that if a planet about the mass of Saturn or a bit larger occupied Jupiter’s place, then the number of impacts on Earth would increase. However if nothing was there at all, there wouldn’t be any difference from our current impact rate. Rather than it being a clear cut case that Jupiter acts as a shield, it seems that Jupiter almost gives with one hand and takes away with the other!”

Does the ‘Jupiter as shield’ hypothesis still hold up for long-period comets? And what role does the giant planet play in the risk of asteroid impact? The team is now at work on the asteroid question, and plans to address the long-period comets after that. But the notion that a solar system needs a gas giant analogous to Jupiter to protect its inner planets may need serious re-examination, even as we continue to study the danger posed by Earth-crossing objects of all kinds.