Physics breakthroughs aside, are there more conventional ways we can reach the stars? Centauri Dreams often cites (with admiration) Robert Forward’s work on beamed laser propulsion, which offers a key advantage: The spacecraft need carry no bulky propellant. Forward’s missions involved a 7200-GW laser to push a 785 ton unmanned probe on an interstellar mission. A manned attempt would involve a 75,000,000-GW laser and a vast vehicle of some 78,500 tons. The laser systems involved in such missions, while within our understanding of physics, are obviously well beyond our current engineering.

Are there other ways to accomplish such an interstellar mission? One possibility is a hybrid system that combines what is known as Miniature Magnetic Orion technologies with beamed propulsion. The spacecraft would carry a relatively small amount of fission fuel, with the remainder of the propellant — in the form of particles of fissionable material with a deuterium/tritium core — being beamed to the spacecraft. In a recent paper in Acta Astronautica, Dana Andrews (Andrews Space) and Roger Lenard (Sandia National Laboratories) describe these technologies and their own recent studies of the Mini-Mag Orion concept.

Mini-Mag Orion, of course, harkens back to the original Project Orion, an attempt to develop a spacecraft that would be driven by successive detonations of nuclear bombs. Mini-Mag Orion takes the concept in entirely new directions, reducing the size of the vehicle drastically by using magnetic compression technology, which Andrews and Lenard have studied using Sandia National Laboratories’ Z-Pinch Machine, the world’s largest operational pulse power device. Their experimental and analytical progress is outlined in the paper referenced below; they now propose a follow-on program to extend their experimental work. 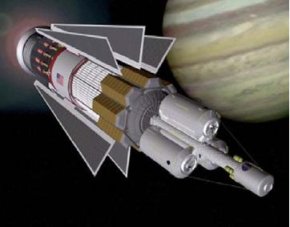 The originally envisioned spacecraft would compress small fuel pellets to high density using a magnetic field, directing plasma from the resultant explosion through a magnetic nozzle to create thrust. This highly efficient form of pulsed nuclear propulsion is here paired for interstellar purposes with beamed propulsion methods, taking advantage of a pellet stream that continuously fuels the departing spacecraft. The interstellar Mini-Mag Orion attains approximately ten percent of light speed using these methods, and as Andrews and Lenard show, the hybrid technologies here studied reduce power requirements from the departing star system and the timeframe over which acceleration and power have to be applied.

With the bulk of the propellant being supplied externally, deceleration in the target star system is an obvious challenge, one met through the use of a magnetic sail. Here is the authors’ explanation of what is essentially ‘free’ deceleration:

In 2003 both Andrews and Lenard postulated using a large superconducting ring to intercept charge particles in interstellar space to slow the spacecraft down from high speeds. Additionally, the solar wind emanating from a star system provides an additional source of charged particles that can interact with the magnetic ﬁeld. Deceleration can actually begin a sizable distance from the target star system… [T]he ﬁrst phase of the deceleration starts at 21600 AU with a two-turn superconducting carbon nano tube reinforced loop. This loop captures the charged interstellar medium and deﬂects it to decelerate the spacecraft. This initial hoop size is 500 km in radius and carries 1,000,000 A of current. The spacecraft decelerates from .1 c to 6300 km/s by the time the spacecraft reaches 5000 AU. This will be quite a light show, so if there are any intelligent life forms with an observing system, they should be able to see the arrival.

Quite a light show indeed! But note this: Even in the absence of a paradigm-changing physics breakthrough, Andrews and Lenard, as Forward before them, have demonstrated that there are ways to reach nearby stars with technologies we understand today and may be able to build within the century. Assume methods no more advanced than these coupled with advances in biology and life extension and it is conceivable that long-lived human crews could populate the galaxy in a series of 60 to 90 light year expansions, an interstellar diaspora that, the authors calculate, could occur every four to five thousand years.

Work out the numbers and you get half the galaxy populated within a million years (Fermi’s question again resonates). The paper is Lenard and Andrews, “Use of Mini-Mag Orion and superconducting coils for near-term interstellar transportation,” Acta Astronautica 61 (2007), pp. 450-458.