‘Leave the propellant at home’ is a key maxim of deep space exploration. If we can find ways to substantially reduce or even eliminate the need for on-board fuel tanks, we maximize the payload and enable missions that would otherwise be impossible. In the near term, solar sails are the ideal way to realize this goal. Driven by the momentum transfer of solar photons, sails can achieve high speeds and, by tacking methods that are in ways analogous to conventional ocean sailing, can move to and fro in the Solar System on their free photon ride.

Laser and microwave beaming to sails is another thing entirely. We’ll one day use those technologies for extended missions into the Kuiper Belt and the Oort Cloud and, if the dreams of some theorists come true, perhaps for interstellar missions at ten percent of light speed. But all that depends upon learning how sails work, and on that score, it’s useful to know of the continuing NASA work on sail technologies. A recent paper by Les Johnson, Roy Young and Edward Montgomery (Marshall Space Flight Center) apprises us of developments in the last few years that should pay off down the road. 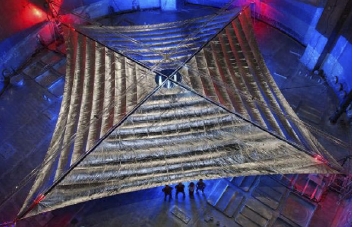 For although the press is fixated on the Space Shuttle and the International Space Station, NASA’s quiet but continuing work on sails offers promise of new technologies. In 2005, two different 20-meter solar sail systems were developed, deployed and tested in NASA’s Glenn Research Center’s Power Facility at Plum Brook Station in Ohio. The companies involved in the research were ATK Space Systems (formerly Able Engineering, Goleta CA) and L’Garde (Tustin CA). In both cases, their sails included four deployable booms and are scalable to larger, 150-meter sails (first-generation sails will doubtless be in this larger size range).

Operational sails will consist of their ultralightweight supporting trusses, a central hub, and a flat, smooth material covered with a reflective coating. The first sails we should see on actual missions will probably use aluminized Mylar or CP-1, materials that have been tested in space and are now being scrutinized for their behavior during long-duration exposure to space environments. Future sails would doubtless use a more robust (and considerably lighter) network of meshed carbon fibers.

This work has proceeded through NASA’s In-Space Propulsion Technology program, whose vision is outlined in the paper:

Early in the project, In-Space Propulsion funded the development of a prototype solar sail system for ground testing that would be used to validate design concepts for: sail manufacturing, packaging, launch to space and deployment; attitude control subsystem function; and to characterize the structural mechanics and dynamics of the deployed sail in a simulated space environment. A square sail conﬁguration consisting of a reﬂective sail membrane, a deployable sail support structure, an attitude control subsystem, and all hardware needed to stow the sail for launch were developed.

The paper on this work takes the research from its six-month concept refinement phase (completed in 2003), a hardware development phase beginning in June of 2003, and a twelve month system verification phase. The latter included testing fully integrated 20-meter solar sail demonstrator systems including their launch packaging containers and operational subsystems, with exposure to high vacuum conditions at the Plum Brook facility as well as launch vibration and ascent vent tests.

But new spacecraft design isn’t solely about hardware. The solar sail research has included the development of simulation tools to predict sail behavior during representative flights, the ultimate goal being to develop an optical diagnostic system that can observe and monitor the health and integrity of the sail after deployment. The paper discusses the other aspects of this research, including developing new modeling techniques, testing solar sail materials, analyzing sail behavior in charged particle environments and examining long-term environmental effects.

None of this makes the evening news, but you build great things incrementally, one carefully defined step at a time. What we’re seeing here is the necessary groundwork that takes the solar sail concept through ground testing and the development of its subsystems, operational tools and computational models. That’s a foundation that will one day be put to work — just when depends as always on funding levels — in the form of space-based testing and, one day, operational missions. The benefits in terms of Solar System exploration should be immense, particulary as we look at increasing the scientific payloads available.

And for truly speculative endeavors? If we can make a sail robust enough, and light enough, and send it on a Sun-diver trajectory with a close solar pass followed by rapid sail deployments, speeds of hundreds of kilometers per second are theoretically possible. That makes Kuiper Belt missions practical and gives us options for pushing out toward the Oort Cloud. And needless to say, the more we learn about solar sailing, the more we will understand the sail technologies that may one day be perfected for beamed propulsion missions to nearby stars.

Les Johnson’s name should be a familiar one to Centauri Dreams readers, particularly in light of his recent book (co-authored with Gregory Matloff and C. Bangs) Living Off the Land in Space (Springer, 2007). We’ll have much to say about this title in coming weeks. The paper is Johnson et al., “Recent advances in solar sail propulsion systems at NASA,” Acta Astronautica 61, pp. 376–382 (2007).