Living Off the Land in Space (review)

In Living off the Land in Space, Gregory Matloff, Les Johnson and artist C. Bangs discuss how mankind may colonize the Solar System and travel to nearby stars using energy and material resources provided by nature. The whole book is devoted to the ‘Living off the Land’ concept, which is introduced in the early chapters. Future space travelers, say Matloff et al., will use solar energy and mine the asteroids in order to reach other planets in our system and, later, stars like Alpha Centauri. 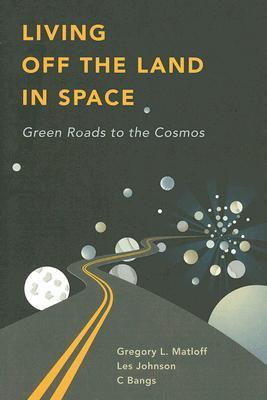 Given the huge distances involved and the difficulties of rapid transport from Earth, such methods are the only feasible way for mankind to leave its home. The authors draw on historical examples of colonization endeavors here on Earth to illustrate that living off the land is quite an old concept. Indeed, our species would still be confined to Africa if early humans had failed to use the resources they found along the way to new continents and islands.

After a short review of propulsion systems (Project Orion and Daedalus, interstellar ramjets, antimatter drives and even space warps), the authors focus on those concepts that may be available in the not too distant future. The reader will find chapters dealing with ion, solar thermal and chemical propulsion as well as space tethers and solar sails as methods of pushing into deep space. All have the advantage of requiring no fundamental breakthrough in physics to achieve the desired result.

Every propulsion system that has ever been envisioned for interstellar travel (even anti-gravity devices, the Zero Point Energy concept and the like are mentioned) is explained in an easy to understand way, laden with but a small amount of mathematics. Science fiction enthusiasts may be disappointed to read here that manned interstellar travel will probably take millennia and that warp drives are essentially impossible, but the authors’ admonition that breakthroughs happen leaves the matter open.

Nevertheless, the goal of the book is to provide a realistic view of what might be possible with technologies that are accessible in the near future. A wealth of references at the end of each chapter point the way to further resources. Living Off the Land in Space should satisfy anyone who wants to learn more about space colonization and the propulsion methods that will make it happen.