Neon isn’t an unusual find in spectroscopic studies of massive stars or, for that matter, in observations of novae or the galactic core. Energetic X-ray or ultraviolet emissions can ionize the gas, at which point it produces infrared light at characteristic wavelengths. Not expecting to find it around low-mass stars like our Sun, researchers have been surprised to find four Sun-like stars showing neon in their disks as measured by a Spitzer Space Telescope project run by the University of Arizona.

That project, called Formation and Evolution of Planetary Systems (FEPS) is run out of Steward Observatory. The idea is to study planet-forming gas around 35 young, solar-type stars. Before this work, none of these stars would have been thought energetic enough to radiate the amount of X-ray and ultraviolet light needed to ionize neon. 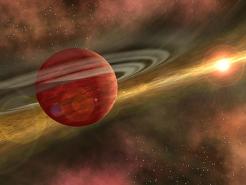 Unexpected though they might be, the observations are useful because neon, while hardly abundant, offers a precise spectral signature that makes it easier for astronomers to track the gas content in circumstellar disks. The neon signature, says Michael R. Meyer (Steward Observatory), reminds us that the planet formation period can be a violent one. And future detections of the gas may help to differentiate between stars retaining their dust and gas disks and those that have already begun to form planets.

“It serves as a valuable reminder that the environment in which the planets formed was harsh, too, in a way. And it could turn out to be an important tracer of remnant gas in circumstellar disks — a kind of ‘vacancy/no vacancy’ sign for planets.”

Image: In this artist’s conception, a possible newfound planet spins through a clearing in a nearby star’s dusty, planet-forming disk. (Image credit: NASA/JPL/R. Hurt, SSC).

If so, neon makes a nice fixture in the toolkit of researchers anticipating the launch of future planet-hunter missions like Kepler and ESA’s Darwin. The more methods we can bring to bear in choosing targets for precious telescope time, the better our chances of success. Tracking stars whose inner disks show gases that can circularize the orbits of Earth-like planets will speed the process. Future studies of stellar systems of different ages are being developed to show how the gas dissipates with time.