How large a planet is depends upon its composition and mass. Earth is largely made of silicates, with a diameter of 7,926 miles at the equator. Imagine an Earth mass planet made of iron and you’re looking at a diameter of a scant 3000 miles. Interestingly, the relationship between mass and diameter follows a similar pattern no matter what material makes up the planet. Running the numbers, an Earth mass planet made of pure water will be 9500 miles across.

Sara Seager (Massachusetts Institute of Technology) has been studying these things as part of a project to model the kind of Earth-size planets we’re likely to find around nearby stars. About the mass/diameter pattern, she says this:

“All materials compress in a similar way because of the structure of solids. If you squeeze a rock, nothing much happens until you reach some critical pressure, then it crushes. Planets behave the same way, but they react at different pressures depending on the composition. This is a big step forward in our fundamental understanding of planets.” 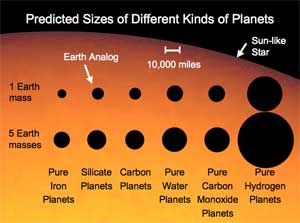 It’s a needed step, too, because we often speak of Earth-size planets as if they were likely to resemble the worlds we see in our own Solar System. The team, made up of scientists from MIT, NASA and the Carnegie Institution of Washington, wants to throw out that assumption, going back to the nature of the protoplanetary disks we’re seeing around young stars. Its speculations have produced fourteen different compositions, among them pure water ice, carbon, iron, silicates, carbon monoxide and silicon carbide. Corresponding sizes can be calculated for each planet.

“We have learned that extrasolar giant planets often differ tremendously from the worlds in our solar system, so we let our imaginations run wild and tried to cover all the bases with our models of smaller planets,” says Marc Kuchner (NASA GSFC). “We can make educated guesses about where these different kinds of planets might be found. For example, carbon planets and carbon-monoxide planets might favor evolved stars such as white dwarfs and pulsars, or they might form in carbon-rich disks like the one around the star Beta Pictoris. But ultimately, we need observations to give us the answers.”

Image: Astronomers have calculated the diameters of various types of planets given certain compositions and masses. This image shows the relative sizes of six different kinds of planets with different compositions, and depending on whether they have the same mass as Earth, or five times the mass of Earth. Note that the 5-Earth-mass planets are larger than their 1-Earth-mass counterparts, but they are not five times larger due to the gravitational compression that occurs when a planet’s mass is increased. The planets are shown silhouetted against the Sun, as if they are transiting planets seen from afar. Credit: Marc Kuchner/NASA GSFC.

Comparing a planet’s size and mass with the help of planetary transits is a first step toward determining its composition. The French COROT satellite should be capable of finding planets not much larger than Earth as they pass across the surface of their star as seen from the spacecraft. One tricky call will be a silicate planet vs. a carbon planet — the two model out to roughly the same size for a given mass. Maybe by the time we need to make such distinctions we’ll have the James Webb Space Telescope around for help.

And this comment in the paper’s conclusion on a definition for ‘super Earths’ is interesting:

The paper is Seager, Kuchner et al., “Mass-Radius Relationships for Solid Exoplanets,” now in press at The Astrophysical Journal, with publication due in late October (abstract).