Chance Pass Through a Cometary Tail

Chance favors the prepared mind. So goes the old saying, never vindicated as clearly as in the encounter between Comet McNaught and the spacecraft called Ulysses. Thomas Zurbuchen (University of Michigan) notes that having a spacecraft on a mission to study the polar regions of the Sun pass through a cometary tail is chancy enough — he likens it to putting your hand in Lake Michigan and pulling out a fish — but having Ulysses already equipped with the needed instruments to study the solar wind means we had an unexpected chance to study the interactions between cold cometary materials from the Solar System’s infancy and hot solar plasmas. Talk about being in the right place at the right time… 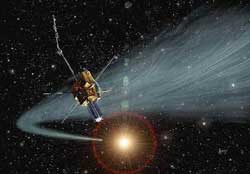 Complex chemistry emerged from the serendipitous encounter, with O3+ oxygen ions showing the effects of cometary materials on the outgoing stream of solar wind ions. O3+ ions are oxygen atoms with a positive charge, resulting from the presence of five electrons instead of eight. Solar wind ions that were originally missing most of their electrons evidently picked up replacements from McNaught’s gaseous envelope. Moreover, even though Ulysses made its pass some 160 millon miles from the cometary nucleus, it found the solar wind had dropped to half speed.

Image: In May of 1996, Ulysses passed through the tail of Comet Hyakutake, with results significantly different than its recent pass through Comet McNaught’s tail. Making sense of the discrepancies may help us to a better understanding of how the solar wind operates. Credit: NASA/David A. Hardy.

Michael Combi, another author on the paper, takes note of the unexpected find:

“This was very surprising to me,” Combi said. “Way past the orbit of Mars, the solar wind felt the disturbance of this little comet. It will be a serious challenge for us theoreticians and computer modelers to figure out the physics.”

Combi’s surprise is understandable given that in 1996 Ulysses passed through the tail of comet Hyakutake and found no real change in solar wind velocity. The recent findings showed the solar wind moving at less than 249 miles per second while somewhere in the neighborhood of 435 miles per second would be expected at that distance from the Sun. The solar wind itself was discovered partially through the observation that cometary tails always point away from the Sun, a reflection of the magnetism and velocity of the high-speed plasma streams pushing outward from the upper reaches of the solar atmosphere.

Using the solar wind to give a magnetic sail a push to the outer Solar System, as in the Mini-Magnetosphere Plasma Propulsion concepts of Robert Winglee, offers another possible solution for future planetary transport (and, long-term, for interstellar propulsion via particle beam), but the Comet McNaught findings point out how far we are from a robust understanding of how the solar wind functions. Setting sail magnetically upon this particular wind may tax the skills of the ablest navigator, but future studies should clarify how variable is its flow.

Next post: ChipSat: To the Stars via Magnetic Fields