Are we seeing an Earth — or at least a Mars-sized world — in the making? Look no further than HD 113766, a binary system perhaps ten million years old some 424 light years away, for the story. One of its stars contains a warm dust belt that may be undergoing planetary formation. If that’s the case, the emerging planet will orbit in the classical habitable zone, defined as that region where liquid water can exist on the surface. 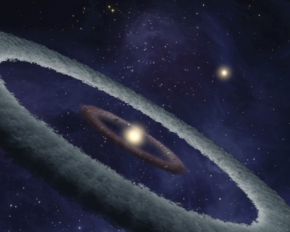 What counts here is the composition of the dusty materials making up its interesting disk. The Spitzer Space Telescope performs its usual yeoman service at this task, its infrared spectrometer flagging the material as a step up from the pristine building blocks of comets. The latter contain interesting organic materials like polycyclic aromatic hydrocarbons (PAHs), along with their water ice and carbonates. But HD 113766’s disk contains no water ice, carbonates or fragile organic materials.

Image: This artist’s conception shows a binary-, or two-star, system, called HD 113766, where astronomers suspect a rocky Earth-like planet is forming around one of the stars. The system is located approximately 424 light-years away. At approximately 10 to 16 million years old, the star is also at just the right age for forming rocky planets. Credit: NASA/JPL-Caltech/JHUAPL.

On the other hand, the disk materials have not yet reached reached the stage of differentiation, where heavy metals separate from rocks early in the planet forming process. The metals around HD 113766 have not totally separated from the rocky material, implying that whatever rocky planets are forming are far from maturing. Carey Lisse (Johns Hopkins University Applied Physics Laboratory) likens the material in the belt to Earthly lava flows, containing plenty of raw rock and iron sulfides.

In fact, Lisse argues that the young star is caught in the act of building a rocky world, observed at a useful point in its evolution:

The right timing, the right material mix, all suggestive of interesting things to come as the infant world grows. Are planets also forming around Beta Pictoris, Fomalhaut and AU Microscopii? Possibly, but we need to tread carefully. The team from the University of Rochester that has been studying these three nearby stars has been using Hubble imagery to measure the thickness of their dust disks, drawing conclusions about the size of planets that may be forming within. You can see in the Beta Pictoris image below how interesting its disk turns out to be. 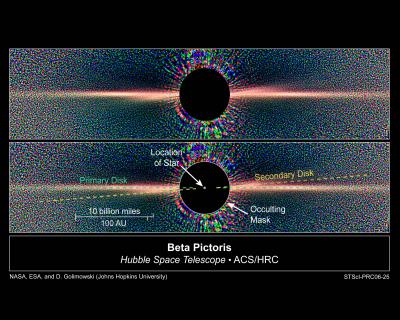 We need to study such things because we’re seeing the building blocks of planet formation and their dynamics on display. A ‘congealing’ planet ought to knock surrounding materials around, leaving visual clues that make the disk seem somewhat inflated. Rochester’s Alice Quillen is an expert on such interactions, which are only subject to scrutiny when the stellar disks appear edge-on as seen from Earth. The relevant stars also need to be near enough for useful Hubble imagery and young enough to be in the process of forming what can be termed embryonic planets.

Pulling all this material together for the three stars studied, Quillen and team think they’re looking at the effects of Pluto-sized objects (’embryos’), about 1000 kilometers in size. But note: We haven’t detected Pluto-sized objects. What we’ve done is to establish that such objects make sense as a plausible explanation for the action we observe in three planetary disks. Are there other explanations? Possibly so, and they may well emerge. This is a small sample, and as with HD 113766, we have no direct detections of the planets themselves, but only inferences subject to our limited knowledge of how protoplanetary disks work.

None of which is intended to cast cold water on some innovative work indeed, but merely to suggest that when we have advanced ground and space-based equipment in place to deliver far more detailed analysis, we are still likely to be surprised about the variety of systems we find. Having few explanations for some of our own outer system objects and knowing as little as we do about the Kuiper Belt, we may discover that even a Beta Pictoris or a AU Microscopii can still confound our best theories.

Lisse’s paper on the HD 113766 is scheduled for The Astrophysical Journal. You can read the Quillen paper “Planetary embryos and planetesimals residing in thin debris disks,” submitted to Monthly Notices of the Royal Astronomical Society, online.