What better way to represent the gorgeous clouds of the Orion Nebula than with hibiscus flowers? Or how about our Sun as a small jewel on the speckled leaf of a gold-dust croton plant? If this sounds surreal, it is, but it’s also a description of part of the Galaxy Garden, a 100-foot in diameter map of the galaxy on the grounds of the Paleaku Peace Gardens Sanctuary on Hawaii’s Big Island. Astronomy artist Jon Lomberg used galactic maps from Leo Blitz (UC Berkeley) to design the project, a leafy, immersive experience accurate enough to satisfy the most demanding. A collaborator of Carl Sagan, illustrator of most of his books and articles, and designer of the cover for the Voyager Interstellar Record, Jon’s accuracy shows through in every botanical detail. 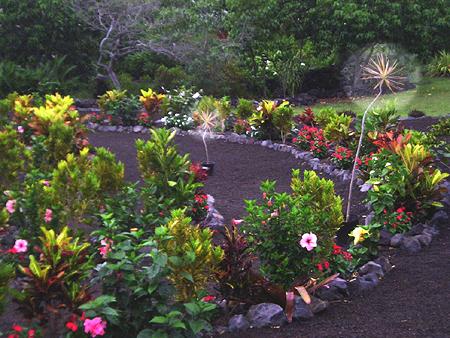 Image: Dracaena trees represent globular star clusters, spherical groups of “only” hundreds of thousands of stars, making them too small to be called galaxies. Most of the clusters have orbits that carry them far above and far below the galactic plane, as represented here in the Galaxy Garden. Credit: Jon Lomberg.

Want to lower the cost of getting into Earth orbit to something not just reasonable but almost trivial? Arthur C. Clarke’s space elevator, popularized first in his 1978 novel The Fountains of Paradise, could be just the ticket, provided we can find the will and money to construct it. IEEE Spectrum recently interviewed Clarke, who had this to say about getting into space the cheap way:

What makes the Space Elevator such an attractive idea is its cost-effectiveness. A ticket to orbit now costs tens of millions of dollars (as the millionaire space tourists have paid). But the actual energy required, if you purchased it from your friendly local utility, would only add about hundred dollars to your electricity bill. And a round-trip would cost only about one tenth of that, as most of the energy could be recovered on the way back!

Once it is built, the Space Elevator could be used to lift payloads, passengers, pre-fabricated components of spacecraft, as well as rocket fuel up to Earth orbit. In this way, more than 90 per cent of the energy needed for the exploration of the Solar System could be provided by Earth-based energy sources. When the Space Elevator becomes a reality in the coming decades, the most expensive components of orbital travel will be in-flight movies and catering.

The world’s most stupendous engineering project awaits, unless we find a cheaper and faster way to leave the gravity well along the way.

AEGIS–the All-wavelength Extended Groth Strip International Survey — comes to Google Sky, the new feature of Google Earth that offers spectacular mapping and imaging of distant celestial phenomena. The region covered by AEGIS has now been surveyed more extensively and with more telescopes than any other region of sky. The release includes color images from multiple satellite telescopes, all of which can be browsed and compared using Google Sky’s rapid browsing capabilities. Sky requires the Google Earth 4.2 release while the AEGIS site provides survey background.

Frank Taylor, that master of all things related to Google Earth, has pointed out to me how we can begin tagging celestial objects discussed in these pages so that Google Sky users can find and investigate for themselves. Lunch with Frank is always fun; he’s constantly pulling up things on his laptop that offer fodder for discussion and thought, and the use of Google’s KML files is something I’ll be glad to take his advice on. More on this as I have time — right now I’m swamped with Tau Zero work and a project for AIAA.

A recent comment by JPL’s Paul Weissman in Scientific American offers answers as to the size of the Oort Cloud, that vast spherical cloud of comets that surrounds our Solar System. Some 1012 comets are thought to be found within, extending halfway to the nearest stars. Are the Centauri stars surrounded by a similar cloud? If so, a region may exist where objects in the two occasionally pass in the night. There’s your cheap ticket to Centauri — one stepping stone to the next, or as my late uncle used to say about TWA, ‘try walking across.’