Ever since the launch of New Horizons in January of 2006 (can it really be that long?), the prospects of doing good science as the spacecraft whipped through the Jupiter system have tantalized and intrigued us. Eight spacecraft have now visited Jupiter, but New Horizons found things no previous mission had witnessed, including the evolution of a volcanic plume, lightning near the planet’s poles, a tighter look at the Jovian rings and a trip down the unexplored length of the planet’s magnetic tail.

In addition to providing the gravity boost that will get New Horizons to Pluto faster, the Jupiter encounter was a valuable chance to shake out the spacecraft’s instruments in preparation for the later encounter. And to hear principal investigator Alan Stern tell it, nothing could have gone better:

“The Jupiter encounter was successful beyond our wildest dreams. Not only did it prove out our spacecraft and put it on course to reach Pluto in 2015, it was a chance for us to take sophisticated instruments to places in the Jovian system where other spacecraft couldn’t go, and to return important data that adds tremendously to our understanding of the solar system’s largest planet and its moons, rings and atmosphere.” 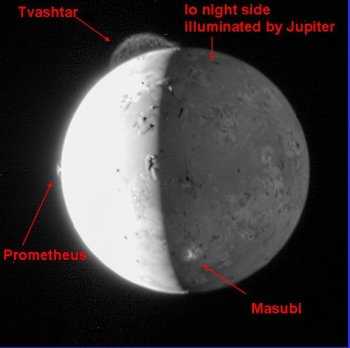 All of which makes me wish I could have attended the Division for Planetary Sciences meeting in Orlando this week, where these results were presented (they’ll also appear in a special section of Science). The Io work was particularly fruitful, spotting eleven volcanic plumes, one of them rising 290 kilometers high above the volcano Tvashtar. In addition to the Tvashtar plume, which could be studied condensing and falling back to Io’s surface, New Horizons picked up the infrared signature of 36 volcanoes and measured lava temperatures.

Image: The Tvashtar plume, reaching 290 km above the surface, along with other plumes and hot spots. Credit: Alan Stern.

Io’s tortured surface was expected to be highly changeable, and indeed it is, with twenty geological changes since the Galileo mission’s last look in 2001. Interestingly, glowing gas clouds appear above dozens of the volcanoes when Io passes into Jupiter’s shadow, evidently resupplying the tiny world’s atmosphere. Here’s Kurt Retherford (SwRI) on the matter:

“When Io goes into solar eclipse, and during the night, its surface temperature drops significantly, causing diminished sublimation of surface material into the atmosphere. The atmosphere at that point collapses down so that all that is left supplying the atmosphere are the volcanoes.”

Moreover, evidence of tons of material from Io’s volcanoes moving down Jupiter’s magnetic tail in slow-moving blobs was found by New Horizons’ particle detectors. For more, including new looks at Jupiter’s meteorology and slides on all the above from the presentation at DPS, check this news release at the New Horizons site. I’ll be posting the complete references to the Science papers as soon as they become available.