Best Glimpse Yet of Nix and Hydra 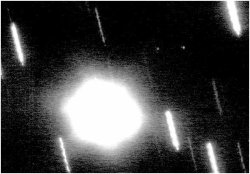 Thirty years ago it was all but impossible to tease the presence of Charon out of the Pluto images available to astronomers. Today we’re using ground-based telescopes like the twin Keck instruments on Mauna Kea (Hawaii) to see the far tinier Nix and Hydra, the minute satellites discovered by the Hubble Space Telescope in 2005. Making Nix and Hydra visible results in Pluto and Charon, far brighter objects, appearing as a bright blob in the image at left. The streaks are the result of Pluto’s motion against background stars during the exposure.

Image (above): Nix and Hydra. This image combines all 16 exposures taken at Keck, with the contrast adjusted to show Pluto’s new satellites Nix (left) and Hydra (right) as the small dots in the upper right. Both Nix and Hydra are about 5000 times fainter than Pluto, thus both Pluto and Charon are washed out in the image. The Pluto system moved with respect to the background stars during the one hour of observations, leaving the stars trailed. Credit: David Tholen.

This is precision work indeed — Nix and Hydra are each less than 100 kilometers in diameter. At magnitude 23.5, they are far less bright than Pluto itself (14th magnitude). Moreover, Keck’s adaptive optics (which compensates for the atmospheric turbulence that can blur the light of distant objects) is going to be used for a continuing set of observations. David Tholen (University of Hawaii) has this to say:

“It is our intent to obtain several more images of the Pluto system, hopefully with this same level of quality, so that we can track Nix and Hydra completely around Pluto several times. By making extremely precise measurements of the satellites’ positions, we will determine their masses by detecting the tiny displacements caused by their mutual gravitational attraction. Once the masses are in hand, we’ll be able to say something more definitive about how big these new satellites are.” 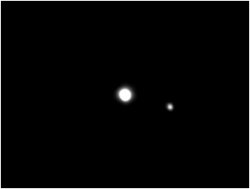 Which is useful in itself, but even more valuable in terms of the New Horizons mission, now making its way to the Pluto/Charon system for a 2015 encounter. The New Horizons team needs all the information it can get about the motion of these satellites well in advance of the flyby, and thus far Keck has delivered. The Keck image at left shows Pluto and Charon themselves, the contrast now optimized in ways that wash out Nix and Hydra. We’ll be seeing far better images from the spacecraft, of course, but the improvement in Earth-bound viewing in the past thirty years is still amazing.