South Dakota’s Homestake Gold Mine, famed for the work Ray Davis did on solar electron-neutrinos, may point toward clues in another search, the quest for dark matter. Experiments called LUX and DEAP/CLEAN are aimed at measuring the recoil of dark matter particles off ultra-pure, non-radioactive gases like purified argon and xenon. Robert McTaggart (South Dakota State University) gives the needed background:

“The visible matter that we all know and love only accounts for 4 percent of the total mass in the entire Universe. Furthermore, the gravitational attraction of a spherical halo of dark matter throughout galaxies can explain why they do not fly apart given their measured rotational speeds. Physicists expect the remaining 96 percent to be made of something other than protons, neutrons, electrons, or neutrinos. This ‘dark matter’ should interact with normal matter via gravity and very rarely via a collision.”

Critical to the work is adequate shielding, a more complicated process than you would think. The new laboratory site, announced by the National Science Foundation in July, is taking extraordinary measures, screening out even non-radioactive impurities in water and electroplating copper underground to prevent surface exposure to cosmic rays, which would produce radioactive cobalt. More in this SDSU news release.
——-
It’s a long way to Comet 67P/Churyumov-Gerasimenko, but when ESA’s Rosetta spacecraft arrives in 2014, it will release the Philae lander onto the nucleus, orbiting the comet for the next two years while the lander does its work. Four planetary swing-bys are needed to get it there, each a fuel-saving gravitational assist, the second of which around Earth takes place in November (another will occur in late 2009). Out of all this we should get the most detailed look at a comet ever, with glimpses of two main-belt asteroids (Steins and Lutetia) along the way.
——-
Black holes formed from the remnants of massive stars were thought to be no more than ten times the mass of the Sun or less until astronomers zeroed in on M33 X-7, whose 15.65 solar masses come as a bit of a surprise. But the calculations are the best ever, drawn from measurements of a star orbiting the black hole. Says Charles Bailyn (Yale University): “…an eclipse in the system provided the exact orientation and gave mass information far more accurate than any previous reports. Researchers rarely have such accurate points of reference.” 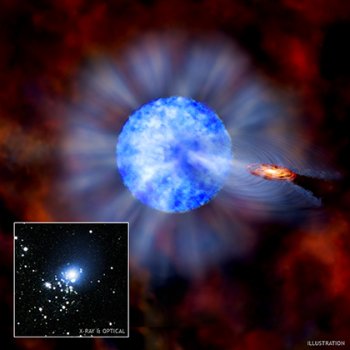 Clearly we have more to learn about how these enigmatic objects form. M33 X-7 is the most distant stellar black hole ever observed, located in the galaxy M33, some three million light years away. Bailyn’s Black Holes Toolbox offers a nice tutorial. The paper on this work appears as Orosz et al., “A 15.65-solar-mass black hole in an eclipsing binary in the nearby spiral galaxy M 33,” Nature 449 (18 October 2007), pp. 872-875, with abstract available.

Image: The main component of this graphic is an artist’s representation of M33 X-7, a binary system in the nearby galaxy M33. In this system, a star about 70 times more massive than the Sun (large blue object) is revolving around a black hole. This black hole is almost 16 times the Sun’s mass, a record for black holes created from the collapse of a giant star. Other black holes at the centers of galaxies are much more massive, but this object is the record-setter for a so-called “stellar mass” black hole. Credit: NASA/CXC/M.Weiss; X-ray: NASA/CXC/CfA/P.Plucinsky et al.; Optical: NASA/STScI/SDSU/J.Orosz et al.

Addendum: The original entry mislabeled M33 as a ‘dwarf’ galaxy, a mistake quickly noted by a reader. See also the comment below re the mass of star vs. black hole.