Looking through the list of candidate missions selected by the European Space Agency recently, my attention was immediately drawn to PLATO, a planet-finder spacecraft designed to study transiting exoplanets and to measure the seismic oscillations of the stars they orbit. Although at first reminiscent of COROT, PLATO (Planetary Transits and Oscillations of Stars) is really more like an enhanced version of NASA’s upcoming Kepler mission, as I’m reminded by Centauri Dreams regular Vincenzo Liguori, who passed along helpful background information.

One immediate difference turns out to be field-of-view, which in PLATO is wide indeed due to the observation strategy involved. Unlike COROT or Kepler, PLATO would put photometric techniques to work in the study of relatively bright stars — 100,000 of these, with another 400,000 studied down to 14th magnitude. The earlier mission concepts are aimed at surveying fainter and more distant stars in a smaller field.

Note the significance of this: If COROT or Kepler identifies interesting planets around much fainter stars, follow-up studies — in particular direct imaging and spectroscopic investigation — become much more difficult than they would be with PLATO’s brighter targets. This mission description from LESIA (Laboratoire d’Etudes Spatiales et d’Instrumentation en Astrophysique) further explains the difference:

Moreover, for this sample of 100,000 stars, similar in size as that of Kepler, PLATO will reach a noise level at least three times lower than the average level of noise of Kepler, and will therefore allow us to detect smaller planets in front of cool dwarf stars, or terrestrial planets in front of hotter and larger stars, thus significantly extending our knowledge of the statistics of exoplanetary systems.

In addition, PLATO is designed to detect terrestrial planets in the habitable zone down to about mV = 14, a performance very similar to that of Kepler. Due to the larger size of the surveyed field, PLATO will monitor about 400,000 stars down to this magnitude, extending by approximately a factor of four the sample of detected planetary systems over Kepler.

And two concepts for the satellite are in play. The first involves 100 small, wide-field telescopes mounted on a single platform, all of these looking at the same field with its own set of 24 CCDs. This so-called ‘staring’ concept involves a first phase in which the same field is studied continuously for several years. The second, the ‘spinning’ concept, uses three identical instruments pointing 120 degrees from one another, in the words of LESIA ‘sweeping out a great circle on the sky perpendicular to the spin axis.’ Both designs assume insertion into an L2 orbit by a Soyuz-Fregat launcher.

Images: Above: One configuration for PLATO, the so-called ‘staring’ concept. Below: The ‘spinning’ concept. Credit: LESIA.

It will be interesting to see how this mission evolves, especially since PLATO should be able to observe smaller exoplanets than could be detected by the two earlier missions. Moreover, since the stars it studies will be three magnitudes brighter, spectroscopy and astroseismology follow-up studies as well should be correspondingly more precise. Tying in PLATO’s findings with subsequent James Webb Space Telescope data could help pin down exoplanet atmosphere information. 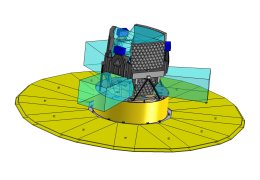 You’ll find the complete PLATO proposal here. ESA’s other proposed missions give us much else to think about, including two proposals for a dark energy mission, the Marco Polo asteroid return mission, and new mission concepts for Jupiter and Saturn. The candidates undergo an assessment period that should end with two missions emerging as the winners, their proposed launches in 2017 and 2018 respectively. Need I point out how much depends upon budgetary considerations in making these choices and deciding if and when they fly?