A Closer Look at Vesta

It seems extraordinary to speak of picking up pieces of an asteroid on the surface of the Earth, but the meteorites known as eucrites are confidently identified with Vesta, the brightest asteroid in the sky (and the only one visible with the naked eye). With the Dawn mission on its way to both Ceres and Vesta, we’ll learn much more about the composition of both, but Vesta is coming into its own as a most unusual object that has contributed much to the surrounding system. 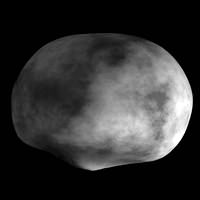 For the 330-mile wide asteroid sports a huge gouge taken out of its south pole, apparently the result of a collision between protoplanetary objects. The hole, some eight miles deep, once contained a half million cubic miles of asteroid material that was subsequently blasted into interplanetary space, where interaction with Jupiter came into play. Gravitational tugging changes orbits, and some of these objects were put onto trajectories that brought them to Earth.

Image: A 3-D computer model of the asteroid Vesta synthesized from Hubble topographic data. The crater’s 8-mile high central peak can clearly be seen near the pole. The surface texture on the model is artificial, and is not representative of the true brightness variations on the asteroid. Elevation features have not been exaggerated. Credit: Ben Zellner (Georgia Southern University), Peter Thomas (Cornell University) and NASA.

Thus we can study at least part of Vesta — materials from its primordial surface — right here. Says Christopher Russell (UCLA):

“Meteorites are hardy objects indeed. Eucrites are a specific type of meteorite that the science community is confident came from Vesta’s surface. We believe that when Vesta was forming, there was molten rock that flowed onto its surface that cooled rapidly. That rapid cooling created small crystals.”

Indeed, the spectral signature of these meteorites is identical with that of Vesta. The isotopes in eucrites are unlike isotopes found in any other rocks on Earth, the Moon or other meteorites. “Simply put,” adds Russell, “we cannot find another place in the Solar System they could be from.”

This JPL feature offers background. We follow Dawn with interest, but note that finding fragments is the best way to encounter an asteroid on Earth, a reminder that a darker alternative is the kind of impact that leads to planetary catastrophe. Our deepening understanding of asteroids should have us sorting out our options for missions to near-Earth objects in hopes of learning as much about their composition as we’re learning about Vesta, and deducing from that how we go about deflecting them.