The Sun and its Stellar Twins

If you’re looking for an analog to the Sun, you have to do more than find a solitary G-class star. Three stars markedly like the Sun — 18 Scorpius, HD 98618, and HIP 100963 — still differ in having several times more lithium than our star. Figuring out whether the low amount of lithium is an unusual trait has ramifications for the search for life in the cosmos. You could theoretically push the issue by saying that the Sun’s composition is unlikely to be found elsewhere, making extraterrestrial life rare. 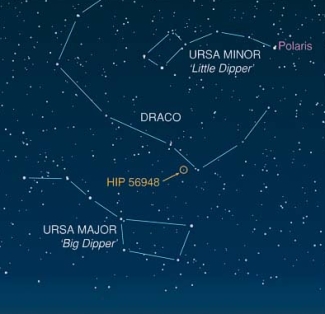 But that conjecture, which was a stretch to begin with, may be dampened by the recent findings about HIP 56948. 200 light years away in the constellation Draco, the star mimics the Sun’s lithium levels. And there’s an additional bonus: Bill Cochran’s team, also at McDonald, has demonstrated that HIP 56948 hosts no ‘hot Jupiters,’ giant worlds so close to their primary that they orbit in a matter of days. Thus this finding, developed using data from the 2.7-meter instrument at McDonald Observatory (University of Texas), shows us an interesting target for future terrestrial planet hunter missions, and perhaps for SETI researchers as well.

Image: HIP 56948 is more like the Sun than any known star. Located 200 light-years away in Draco, the dragon, the star is too dim to see with the unaided eye. Credit: Tim Jones/McDonald Obs./UT-Austin.

Hot Jupiters, of course, do not rule out terrestrial worlds in the same system. We know little enough about how the formation and probable migration of these planets into the inner system would affect smaller rocky worlds. But finding true Solar analogs gives us the chance to study stars like ours in a broader context, learning how accurate it is to consider Sol as the baseline for a variety of astrophysical studies. Moreover, the same team has found a second Solar analog with similar lithium levels, HIP 73815. It’s a list that’s bound to grow.

The paper is Melendez, “HIP 56948: A Solar Twin With a Low Lithium Abundance,” in press at Astrophysical Journal Letters (abstract).