The Milky Way as a Garden

Tau Zero journalist Larry Klaes looks at Jon Lomberg’s stunning Galaxy Garden in Hawaii. Lomberg told Larry that working on the garden had made him appreciate on a primal level just how many objects there are in even a ‘small’ section of the Milky Way. So there’s one answer to the Fermi Paradox: If extraterrestrial civilizations are out there, maybe they’re simply too busy exploring to have gotten around to us!

There is a galaxy on Hawaii. Not an actual galaxy, of course, as a typical island of stars contains many billions of suns and spans hundreds of thousands of light years. The galaxy residing on the largest of that particular chain of Pacific islands is a 100-foot wide living representation of the vast stellar realm our planet and humanity dwells in, the Milky Way.

Called the Galaxy Garden, the idea for this unique project began about eight years ago in the mind of artist Jon Lomberg, who worked with Cornell University astronomer Carl Sagan on his Cosmos PBS television series and created the artwork placed on the golden Voyager Interstellar Record.

“The galaxy has always fascinated me,” says Lomberg. “One of the biggest misconceptions the public has is what a galaxy is. People can’t grasp the scale. They often confuse galaxy with solar system. I wanted to have a way to help people see and understand the Milky Way on a scale they can relate to.”

Lomberg cites two reasons for his using a garden to showcase our galaxy. One involves having a structure that people can actually walk through to be physically present in it. The other comes from seeing parallels between plant life and celestial objects, going back to his earlier artwork which combined biological and astronomical motifs, including the dandelion seed shape of the Spaceship of the Imagination that Sagan used to travel about the Universe in the Cosmos series. 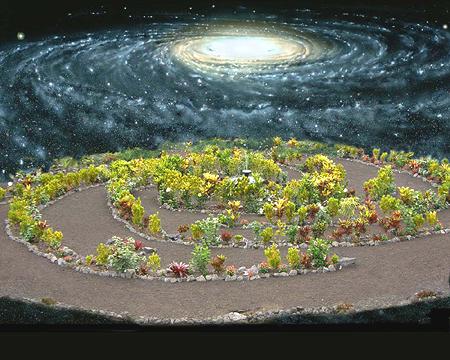 Image: The centerpiece of the Paleaku Astronomy Center is the 100 ft. diameter model of the Milky Way. The scale is 1000 light years per foot, which is about 83 light years per inch. The Galaxy Garden is set on 1/4 acre of lawn, whose gentle swell suggests the observed warp of the actual galactic disk. Credit: Jon Lomberg.

“Star forming regions like the Orion Nebula always looked like flowers to me,” explains Lomberg “This is the basis for the idea of using plants to make a large model of the Milky Way galaxy.”

After searching for a place to literally and figuratively plant his idea, Lomberg was offered a plot by Barbara DeFranco, Director of the Paleaku Peace Garden Sanctuary. Paleaku Gardens is a nine acre botanical garden in Kona, Hawaii, on the western side of the island that facilitates educational, spiritual, and cultural programs. The garden declares its mission “is to offer a sanctuary for the advancement of individuals toward peace and harmony.”

“Without [DeFranco] there wouldn’t have been a Galaxy Garden,” said Lomberg. “She offered the land for free because she thought it would enhance her gardens. Barbara is a partner in this endeavor; she knows as much about gardening as I do about astronomy.”

Major funding for the heavy equipment to build the garden, the accompanying visitor’s center, and the one thousand plants required to represent the Milky Way came from the Change Happens Foundation. The man who endows that organization is a big fan of Carl Sagan and his Cosmos series. Seed money came from the New Moon Foundation.
Making and keeping the Galaxy Garden accurate fell to UC Berkeley astronomer Leo Blitz, who co-discovered the large “bar” of stars stretching across the galactic center. Blitz spent over two years mapping out the true structure of the galaxy for the garden.

“[Blitz] is the guy who kept me honest,” declares Lomberg. “He gave me a basis to start from. Even professional astronomers who think they understand the Milky Way will find their conceptions of it deepened by the Galaxy Garden.”

To give a sense of scale to this special project, each foot of the garden equals one thousand lights years, the distance light travels in one year moving at 186,000 miles each second – about six trillion miles. Each inch equals 83 light years.

Lomberg originally thought he could represent some of the 400 billion stars of the Milky Way with some kind of small flower, but he soon realized that even they would be too large at the garden’s scale, nor could he have enough.

In their place, Lomberg turned to using the gold dust croton plant, whose yellow speckled green leaves stand in for various fields of stars. One leaf holds our Solar System and most of our neighboring suns. The croton plant was also chosen for its longevity, slow growth, lack of thorns, and high tolerance to sunlight.

Image: A small yellow crystal earring shows the position of our Earth and Sun, though our solar system is actually 1,000 times smaller than the jewel. Nearby bright stars are also shown with different colored jewels. Credit: Jon Lomberg.

The nebulae, clouds of dust and gas from which stars are born, are depicted by the colorful flowers of the hibiscus plant. Smaller planetary nebulae, the signs of a sun on its way out of existence, are shown with smaller red and white flowers such as periwinkles and vincas.

Globular clusters, spherical collections of hundreds of thousands of stars, are represented by dracaena trees. These plants were chosen to show some of the clusters which dwell “above” the plane of the Milky Way’s spiral disk, though Lomberg notes it will take several years for the thin-trunked trees to attain the proper height.

Traveling in towards the center of our galaxy, visitors will find the aforementioned galactic bar represented by an oval of small gray boulders. Inside that formation, at the very core our stellar island, is a water fountain representing the supermassive black hole residing there. Four million times more massive than our yellow dwarf sun, the galaxy’s black hole sits at the center of the Milky Way, constantly ingesting interstellar dust and gas and the occasional star.

“I was very mindful of how important it was for Carl Sagan to have people understand our place in the Cosmos,” said Lomberg. “The Galaxy Garden is an artist’s culmination of my whole career of doing galaxies. One of the first paintings Carl ever bought from me was one depicting where we were in the galaxy. We never talked about the Galaxy Garden concept, but Carl; always liked the metaphorical approach to explaining the Universe. In my heart, this garden is dedicated to Carl Sagan. It carries on the tradition of public elevation that he cared about so much.”

The Galaxy Garden, which opened to the public on October 21, can also be viewed online.