A Technological Civilization by Night

Rosetta makes its reappearance at just the right time for me. The spacecraft, making its second Earth swing-by on November 13, will use its gravity assists past Earth and Mars to reach Comet 67P/Churyumov-Gerasimenko in 2014, deploying a lander onto the nucleus and spending two years orbiting the comet. The close approach produced the memorable image below. I thought I was too under the weather today to post anything, but Rosetta’s composite shot of Earth by night offers a short, memorable subject. Look at those city lights! 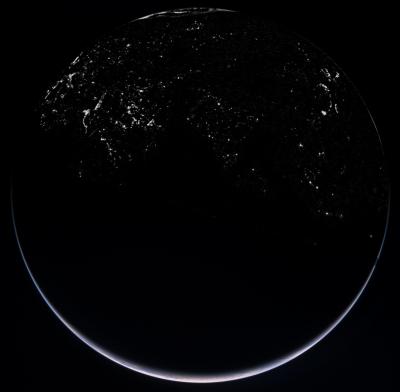 Image: This is a composite of four images combined to show the illuminated crescent of Earth and the cities of the northern hemisphere. The images were acquired with the OSIRIS Wide Angle Camera during Rosetta’s second Earth swing-by on Nov. 13. This image showing islands of light created by human habitation was taken with the OSIRIS WAC at 19:45 CET, about 2 hours before the closest approach of the spacecraft to Earth. At the time, Rosetta was about 80,000 km above the Indian Ocean where the local time approached midnight (the angle between Sun, Earth and Rosetta was about 160°). The image was taken with a five-second exposure of the WAC with the red filter. This image showing Earth’s illuminated crescent was taken with the WAC at 20:05 CET as Rosetta was about 75,000 km from Earth. The crescent seen is around Antarctica. The image is a color composite combining images obtained at various wavelengths. Credit: ESA ©2005 MPS for OSIRIS Team MPS/UPD/LAM/IAA/RSSD/INTA/UPM/DASP/IDA.

Of course, what gets my attention is that this is what a technological civilization — the only one we know exists — looks like by night to an approaching spacecraft. Will we one day have interstellar probes that can make a Rosetta-style pass around a world like this in another solar system? For that matter, will we ever have the kind of spectacular close-up images that could result from advanced sunshade concepts like New Worlds, showing us the lights of alien cities? Let’s hope the answer is yes, and that our technologies will one day find signs of extraterrestrial intelligence. If that doesn’t happen, those city lights Rosetta found on Earth begin to look like a reminder of how fragile sentient life may be.