Is Luna a Celestial Rarity?

Having just written about dust formation around HD 23514, a Sun-like star in the Pleiades, I was drawn to this quote by Nadya Gorlova (University of Florida, Gainesville), whose recent work suggests that if moons like our own were common, we’d be seeing more dust than we do around other stars. “When a moon forms from a violent collision, dust should be blasted everywhere,” says Gorlova. “If there were lots of moons forming, we would have seen dust around lots of stars — but we didn’t.” By contrast, the UCLA study on the Pleiades sees major collisions as common in young solar systems, though to be sure it didn’t focus its conclusions on the 30 million year age range, as the Florida study did.

Gorlova’s team used data from the Spitzer Space Telescope and operated under current assumptions about lunar formation, in which an impactor the size of Mars is thought to have struck the Earth, creating a vast debris field that fell into Earth orbit and eventually became the Moon. The theory sets Earth’s Moon apart from the rest of the Solar System, where planetary satellites seem to have formed at the same time as their planet or else were captured by that planet’s gravity. If our Moon is anomalous, then how often will we find exoplanets orbited by similar moons? 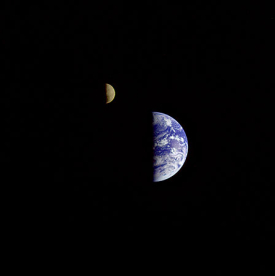 The study looked at four hundred stars in the range of 30 million years old, which is the age our Sun is thought to have been when the Moon formed. The result seems stark: Only one of the four hundred shows the kind of dust cloud that flags such a collision. From this, the team calculates a five to ten percent chance that a given solar system will create a moon like Earth’s, and that’s a high estimate. “We don’t know that the collision we witnessed around the one star is definitely going to produce a moon, so moon-forming events could be much less frequent than our calculation suggests,” says co-author George Rieke of the University of Arizona, Tucson.

Image: Our Earth-moon system, photographed here by NASA’s Galileo spacecraft in 1992, might be somewhat uncommon in the universe. New evidence from NASA’s Spitzer Space Telescope suggests that moons that formed like ours — out of colossal collisions between rocky bodies — might arise in, at most, 5 to 10 percent of planetary systems. Credit: NASA/JPL-Caltech.

HD 23514, the star examined by Benjamin Zuckerman’s team at UCLA, is about 100 million years old and compared to most stars of its age, virtually choked by dust. But the UCLA work on this star (and earlier on the Sun-like BD+20 307) suggested that younger stars — in the 10 million year range or younger — are hotbeds of collisional activity of the sort that forms planets and, one would assume, breaks them apart to form moons. Perhaps our Moon is simply a late arrival, with other moons like it more likely to form earlier in the history of a given star’s development.

In any case, the Florida study makes a strong case that by the time a star is 30 million years old, it’s likely to have finished the planet formation process, so collision-generated moons from that point on are less likely. It would be interesting to have these two teams in the same room for debate, something conference organizers should note for future reference. Meanwhile, the paper is Gorlova et al., “Debris Disks in NGC 2547,” The Astrophysical Journal 670 (November 20 2007), pp. 516-535 (abstract).