The Monday after the Thanksgiving holiday in the States is always gloomy as people readjust to work after the long weekend. So let’s do something light-hearted for today with a look at what evolution can produce in the hands of Japanese film directors. Larry Klaes considers Mothra, a tale of a small creature grown large, and the demands its unexpected size would make if such things existed in the real world. Larry has been to a ‘science cabaret’ inspired by the Café Scientifique movement, which brings science to the public in informal settings. What better format to convert cinematic fantasy into science? We need to get interstellar ideas into such venues.

When looking for lessons in science, one might be forgiven for not considering the Japanese monster films of the latter half of the Twentieth Century as a prime source for such material. Yet a lesson in science is exactly what was extracted from one particular member of that genre, courtesy of entomologist (a.k.a. bug specialist) and juggler Dr. Paul S. Robbins of Cornell University’s New York State Agricultural Experimental Station in Geneva. Robbins discussed the “Moth vs. Myth: The Science Behind the B-Movie Monster Mothra” at Ithaca’s Science Cabaret.

Warming up his audience with a series of slides of various insects in all their colorful glory accompanied by techno music, Robbins began his talk with a personally edited version of the 1961 film Mothra. 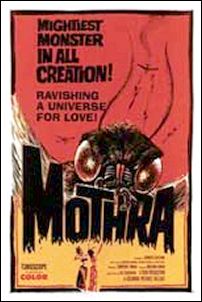 The plot involves a gigantic moth named Mothra that invades Japan in search of twin singing fairies that had been kidnapped by some explorers who had visited their native land, a place called Infant Island. The kidnappers hoped to make themselves rich by showcasing these unusual little creatures to the public. What they hadn’t planned on was the wrath of Mothra.

The film displayed Mothra in all its stages of development, from its start in a giant egg to its becoming a giant swimming larva (caterpillar), with its mature winged form eventually emerging from a giant cocoon wrapped around Tokyo Tower. The adult Mothra wreaked havoc with numerous model vehicles and buildings by flapping its giant wings, until the protagonists of the film finally figured out a way to return the fairies to the monster moth and stop its attacks.

Putting aside for a moment whether a member of the insect order Lepidoptera being the size of a large aircraft could ever exist in reality, let alone swim in the Pacific Ocean and attack major cities in search of some tiny singing fairies, Robbins then gave a brief lesson in insect anatomy.

Among the features common to most insects are a hard, waxy exoskeleton for the structural integrity of their bodies, rather than an internal skeleton made of bone. Another common element is the lack of lungs for taking oxygen into their bodies and removing carbon dioxide. Instead, insects use a collection of tubes called tracheae to diffuse these gasses directly to and from their tissues.

The method of insect respiration having been established, Robbins questioned whether a moth as big as Mothra would be able to breathe. The much longer than usual distances the essential gasses would have to travel around the monster moth’s body “means a slower delivery, but the larger tracheal diameters could also speed up the process.” 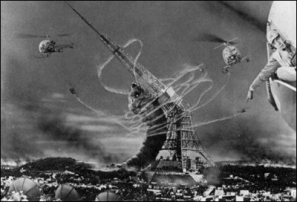 Robbins also speculated on whether such a huge moth could actually fly in the air, emphasizing the point that “size really does matter” in this situation. Driving home the concept of “surface area to volume ratio” to the crowd, the Cornell entomologist – with the help of some juggled ping pong, tennis, and bowling balls, among other items – demonstrated that the volume of an object increases far faster than its surface area.

Image: As startled helicopter crews look on, Mothra in its larval form destroys Tokyo Tower in the 1961 film.

What this means for the monster moth of Infant Island is that “a scaled up version of your average porch light moth would be unable to manage the challenges Mothra faced,” concluded Robbins. “Mothra would never be able to get off the ground, due to the limited surface area of its wings.” Mothra would also be unable to swim in its giant caterpillar stage as it did during the film.

As for the tales told by Mothra, while the reality of the main character in the film is iffy at best, Robbins suggests that when viewing this and most other such fictional entertainment, one should always “enjoy the story… but think about the science,” even if it is a giant moth that swims, flies, and attacks models of major cities.

Science Cabarets are inspired by the Café Scientifique movement, which started in Europe in the late 1990s and has spread rapidly. Cafés Scientifiques promote public engagement with science by eschewing a lecture format in favor of informal talks on topics of broad interest, which are used as a jumping-off point for group discussion.