When I use the term ‘interstellar mission,’ people assume I’m talking about a far future crewed mission to a star like Alpha Centauri or Epsilon Eridani. But the two Voyager spacecraft are on an interstellar mission of a sort, meaning they’re eventually going to leave the Solar System entirely and head into true interstellar space. Because the Voyagers’ power looks sound enough to keep sending data for another decade or more, we should thus get an interesting look at how our solar neighborhood differs from the medium that Sol and all the other stars in the Orion Arm swim in. 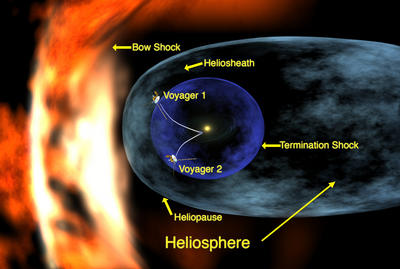 The termination shock is that place where the solar wind — charged particles flowing outward from the Sun — slows below the speed of sound. It should be a tricky and mutable place, there being no fixed boundary out there some eight billion or so miles from our star. Instead, the termination shock should vary depending on solar activity and other factors we may learn more about as we study the plasma, gas and dust outside. Thus Voyager gets the probable chance to pass through the shock more than once, as Haruichi Washimi (UC Riverside) notes:

“After it crosses this boundary, Voyager 2 will be in the outer heliosphere beyond which lies the interstellar medium and galactic space. Our simulations also show that the spacecraft will cross the termination shock again in the middle of 2008. This will happen because of the back and forth movement of the termination-shock boundary. This means Voyager 2 will experience multiple crossings of the termination shock. These crossings will come to an end after the spacecraft escapes into galactic space.”

Washimi’s simulations say that Voyager will cross the termination shock almost any time now, perhaps as late as early next year. He and his team are making their predictions based on geomagnetic disturbances caused by what’s happening on the Sun, their data drawing on what Voyager 2 has already passed along. Voyager 1 passed the termination shock in December of 2004. Up next for both craft: The heliopause, where the solar wind comes to a halt and interstellar space really begins.

The work of Washimi and team is scheduled to appear in the December 1 issue of The Astrophysical Journal.

Next post: Two Views of a Stellar System in the Making