To Tame the Solar Wind

Some day we may be using solar sails to take payloads into an increasingly busy Solar System. Let’s hope that day isn’t far off, because the technology looks practical. But as we study solar sail methods, in which the sail is pushed by the momentum of photons, we also want to keep magnetic sail possibilities firmly in mind. A magsail could theoretically ride the ‘solar wind,’ that stream of charged particles pushing out from the Sun at speeds approaching 1.5 million kilometers per hour.

Dana Andrews (Andrew Space) considered the problem of drag posed by interstellar ramjet concepts back in the 1980s, and along with fellow engineer Robert Zubrin went on to ponder how enormous magnetic sails could take advantage of the solar wind. The beauty of the concept is that you do away with a material structure of the sort so tricky to deploy in large solar sail designs. Instead, you generate the magsail from within the spacecraft. Couple this with a particle beam and you may have an interstellar vehicle on your hands. 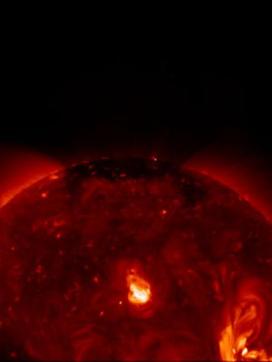 Robert Winglee (University of Washington) has been working with his own version of such a sail under a methodology called Mini-Magnetospheric Plasma Propulsion, or M2P2, for some time. A magsail to the heliopause would really move out, continuously gaining momentum from the flux of protons and electrons flowing outward from the Sun. Launched today, such a vehicle might cross the heliopause before either of our Voyagers. But of course it won’t be launched today, for we have much to learn not only about how magsails might function, but also about the nature of the solar wind itself.

Image: An X-ray jet launching plasma out into the solar system from the Sun’s north polar coronal hole. This image was taken Jan. 10, 2007, by Hinode’s X-ray telescope. Credit: Hinode/SAO/NASA/JAXA

Japan’s Hinode mission is helpful on that score. It’s clear from Hinode data recently reported in Science that magnetic waves are critical in driving the solar wind outward. So-called Alfvén waves, magnetic waves that transfer energy from the Sun up through its atmosphere, have been theorized as the cause of the solar wind, but it took Hinode to clarify the role they play. Thus Alexei Pevtsov, a Hinode program scientist:

“Until now, Alfvén waves have been impossible to observe because of limited resolution of available instruments. With the help of Hinode, we are now able to see direct evidence of Alfvén waves, which will help us unravel the mystery of how the solar wind is powered.”

Hinode carries a high resolution x-ray telescope, allowing researchers to observe x-ray jets low in the corona at the Sun’s poles. The upshot: Whereas before we only saw a few of these jets of hot plasma a day, Hinode saw an average of 240 a day. Alfvén waves and the plasma bursts of these jets are both formed when oppositely charged magnetic fields collide and release energy, a process called magnetic reconnection. The x-ray jets and the Alfvén waves within them are thus identified as major factors in the creation of the solar wind, a theory born out by another team’s findings that the solar chromosphere is riddled with Alfvén waves.

The more we learn about the power of the solar wind, the more interesting it becomes not only as a natural phenomenon but as a propulsion concept. The European Space Agency offers an overview of the recent Hinode findings, and the December 7 issue of Science carries ten papers on Hinode, among them Cirtain et al., “Evidence for Alfvén Waves in Solar X-ray Jets,” Science Vol. 318, No. 5856, pp. 1580-1582 (abstract).

Next post: Voyager: Still Not Out of the Shockwave?