You knew as soon as you opened Carl Sagan’s 1973 title The Cosmic Connection that you were leaving an Earth-centric view of the cosmos behind. The title page showed, spread across both it and the facing page, a spiral galaxy. The work of Sagan friend and collaborator Jon Lomberg, the illustration included reference to Type I, II and III civilizations, the Kardashev ranking that few laymen had heard about in those days, but which Sagan’s work would illuminate for an increasingly interested public. 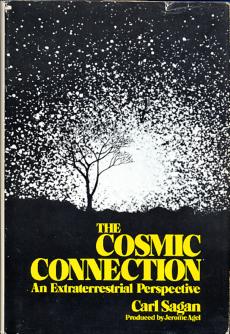 The public would have been drawn first, though, to the cover of that first edition of The Cosmic Connection. A night landscape in black and white, a solitary tree outlined against the sky. But what a sky, filled with what looked like a galaxy — billions and billions of stars — rising. That image encapsulated so much of the book’s message. It juxtaposed our familiar terrain against something so vast, so filled with the potential other stars suggest, that you were forced to speculate on our place in the universe, and ponder all over again how unlikely it was that we might be alone.

Image: A bit dog-eared but still a prize possession, my copy of The Cosmic Connection.

I remember feeling these things when I bought the book in 1973, and find them reawakened as I look at that same copy on my desk this morning. The subtitle of the book is ‘An Extraterrestrial Perspective,’ and Sagan wasted no time in providing it, speculating in an early chapter on using a computer to view the sky as seen from Alpha Centauri:

We now ask the computer to draw us the sky from the nearest star to our own, Alpha Centauri, a triple-star system, about 4.3 light years from Earth. In terms of the scale of our Milky Way Galaxy, this is such a short distance that our perspectives remain almost exactly the same. From α Cen the Big Dipper appears just as it does from Earth. Almost all the other constellations are similarly unchanged. There is one striking exception, however, and that is the constellation Cassiopeia. Cassiopeia, the queen of an ancient kingdom, mother of Andromeda and mother-in-law of Perseus, is mainly a set of five stars arranged as a W or an M, depending on which way the sky has turned. From Alpha Centauri, however, there is one extra jog in the M; a sixth star appears in Cassiopeia, one significantly brighter than the other five. That star is the Sun. From the vantage point of the nearest star, our Sun is a relatively bright but unprepossessing point in the night sky. There is no way to tell by looking at Cassiopeia from the sky of a hypothetical planet of Alpha Centauri that there are planets going around the Sun, that on the third of these planets there are life forms, and that one of these life forms considers itself to be of quite considerable intelligence. If this is the case for the sixth star in Cassiopeia, might it not also be the case for innumerable millions of other stars in the night sky?

Indeed. Back then, speculations about the ‘Great Silence’ weren’t quite so hard-edged as they’ve become, and the belief that if a large-scale SETI search were mounted, it would produce results in short order seemed more than reasonable. It’s certainly what I believed at the time.

Reading Sagan’s book made the prospect of extraterrestrial intelligence not just accessible but thrillingly real. I was a graduate student in 1973, studying arcane medieval languages like Old Icelandic, Gothic and Anglo-Saxon, absolutely in love with the idea of re-creating a vanished past through words. I identified with Sagan not only because of my own long-standing interest in our place in the universe but also because he brought that same kind of passion to the study of space.

Passion was the ticket, and The Cosmic Connection was loaded with it. I can’t say it changed my life, because even as a kid I was obsessed with the questions it considers. But I know people whose life it and the later COSMOS series did change, people who went on to careers in various of the sciences because of the enthusiasm they gathered from Sagan’s work. On a broader scale, I know people who continued at their own careers in entirely other fields, but who retained a sense of the grandeur and awe of the universe that they first acquired by watching COSMOS or reading other Sagan books, particularly the absorbing Contact.

Back in 1973, I took my well-read copy of The Cosmic Connection around to my friends. We were, most of us, laboring in subjects far removed from the celestial, but the book got passed around, read, discussed at our innumerable coffee sessions in UNC-Chapel Hill’s Pine Room. It’s not as if we didn’t have other things to do, all of them on tight deadline. Now that’s skillful — to take subjects as vast as exobiology and astrophysics and render them with such transparent, supple style that amateurs like we all were then found ourselves excitedly weighing the prospects for other life in the cosmos, for missions to other stars. All of this while we were supposed to be parsing scribal errors in the Beowulf manuscript!

Making the technical accessible is one of the most difficult writing jobs there is. Sagan had the gift, but he coupled it with art (the exquisite designs of Lomberg), music, special effects, and photography from our space missions to create the classic COSMOS series. In a sense, his gift was more that of film director than writer, for a director works with a team, and not only with a script but with values of cinematography that transform written words into visual experience. His later books drew on the same values. No one in the cosmology game has equaled what Carl Sagan did with these tools, and it’s both humbling and empowering to remember how he used them on this eleventh anniversary of his death.