Exoplanetary Weather: From a Single Pixel

How much information can you extract from a single pixel? That’s a key question for exoplanet studies as we look to the day when advanced telescopes can actually see a planet orbiting another star. But a single point of light seems to offer scant value, which is where Enric Pallé (Instituto de Astrofísica de Canarias) and colleagues go to work. They’ve been looking at how that single pixel changes over time, and what we might glean from it in terms of planetary details.

A key factor is cloud cover. Using data from Earth’s weather satellites, the scientists have been able to discover consistent patterns associating clouds with arid or rainy landmasses. Pallé explains:

“The trick lies in interpreting the movement of the Earth’s surface and the clouds as periodical signals, just as if we were to observe the spots on a spinning ball appearing and disappearing…[O]n a global scale clouds aren’t as random and chaotic as is generally believed, but instead follow a pattern marked by continental orography and oceanic currents.” 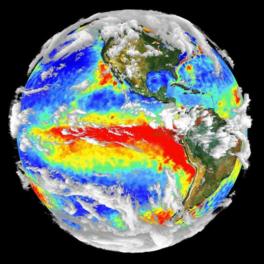 The team studied two decades’ worth of data to produce its computerized model of Earth’s brightness. Over time, cloud patterns would help astronomers figure out the rotation period as particular brightening showed up with each rotation. And with the length of the day established, variations during that period would provide some indication of weather changing on the surface.

Image: Clouds are indicative of atmospheric pressure and existing temperature. Terrestrial cloud cover can be seen this three-dimensional representation, obtained from combined measurments from various meteorological satellites. The cloud distribution is represented during the phenomenon known as “El Niño” (1997-98) and shows anomalies in sea surface temperatures. Credit: NASA.

So an extraterrestrial civilization looking at Earth just might be able to say it had detected a living planet, one probably containing clouds and liquid water. Pallé and team had a poster at the Extreme Solar Systems conference last summer at Santorini that explains the latter:

Such variability is likely to be related to the atmospheric temperature and pressure being near a phase transition. Thus, such observations would support the possibility of liquid water on an extrasolar planet.

The assumption is that the repeated appearance and disappearance of clouds indicates active weather, and the contrast to worlds like Venus, whose brightness doesn’t change, is obvious. So are the limitations of the method, but add it to spectroscopic observations identifying elements in the planet’s atmosphere and you begin to piece together a picture of a living world.

How best to put such data to work? From the paper:

…we could learn if dynamic weather is present on an Earth-like exoplanet, from deviations from a fixed phase curve. In contrast, a cloud-free planet with continents and oceans would not show such light curve deviations. With phased light curves we could study local surface or atmospheric properties with follow-up photometry, spectroscopy, and polarimetry, to detect surface and atmospheric inhomogeneities and to improve the sensitivity to localized bio-markers. Finally, we have also provided guidance for the necessary specifications for future space missions.

The paper is Pallé, et al., “Identifying the rotation rate and the presence of dynamic weather on extrasolar Earth-like planets from photometric observations,” slated to appear in The Astrophysical Journal; full reference when available.