Musings on a Youthful Planet

People seem to be getting younger all the time. I’m told this is a common perception as you get older. In any case, it wasn’t so long ago that I met the son of an acquaintance at an informal gathering. He looked to me to be about fourteen years old, but something warned me not to assume this. I said “What do you do? Are you in school?” His reply: “No, I’ve got my own dental practice downtown.” I don’t know how old you have to be to become a dentist, but I do know it’s a lot older than fourteen!

Exoplanets and the stars they circle, on the other hand, seem to be mostly of a certain age, the denizens of relatively mature systems. Which is why TW Hydrae is so interesting. It’s an infant in stellar terms, at eight to ten million years old only a fraction of the Sun’s age. Like other stars in its age group, it is surrounded by a circumstellar disk of gas and dust, the sort of place where planets can form. And indeed, what seems to be the youngest planet yet detected has now been located within a gap in that disk. TW Hydrae b is about ten times as massive as Jupiter, orbiting in 3.56 days at a distance of some six million kilometers, or 0.04 AU. 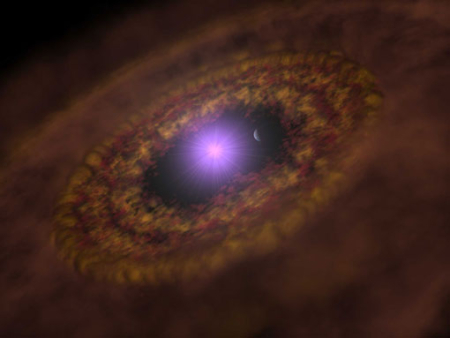 This work comes out of the Max Planck Institute for Astronomy (MPIA) in Heidelberg, where a team led by Johny Setiawan used European Southern Observatory equipment at La Silla (Chile) to make the find. TW Hydrae b turns out to be quite a catch. Starspots analogous to the sunspots on our own star can distort radial velocity readings, a particular problem with young stars whose surface is still relatively unstable. But MPIA’s Ralf Launhardt seems sure of the result, saying:

“To exclude any misinterpretation of our data, we have investigated all activity indicators of TW Hydrae in detail. But their characteristics are significantly different from those of the main radial velocity variation. They are less regular and have shorter periods.”

Bear in mind that none of the known extrasolar planets have, until now, been found around stars young enough to still have their circumstellar disks. Here again we’re looking at a limitation in our methods, younger stars having been excluded from many searches because of the difficulty of measurement caused by the above mentioned solar activity. Now we’re seeing some constraints on planetary formation, learning that a planet can form within a ten million year timeframe and, presumably, migrate inward as it interacts with the circumstellar disk to its present position.

Discoveries like this one add to our knowledge of planetary formation. Is this how all ‘hot Jupiters’ form? Things we need to learn more about include the average lifetime of a circumstellar disk, now thought to be somewhere between ten and thirty million years. And the core accretion model we’re talking about here is still challenged by the gravitational instability alternative, which theoretically allows much faster formation of such giant worlds. The new planet becomes a helpful test case in which to simulate both scenarios as we look for still younger planets.