Having looked at Titan and Europa yesterday, we can complete our outer planetary trifecta with a stop at Enceladus, lately of great interest as an active and possibly life-bearing moon. One hot spot detected there by Cassini is ejecting plumes of ice and vapor above the arid world in a cloud so fine that, according to William McKinnon (Washington University, St. Louis), the result is like a smoke made of ice, its particles about one-thousandth of a millimeter across. Enceladus is clearly a geologically active world, far from the inert desolation once expected. 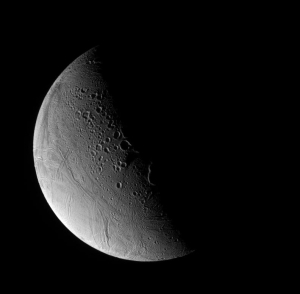 All of which makes the Saturnian moon intriguing in the extreme when you start wondering about the presence of water and the possibilities of life. But McKinnon is quick to dash that hope when asked bluntly whether there is evidence for a subterranean ocean:

“I don’t think so,” McKinnon said. “The strongest piece of evidence against that is measurements made from Earth of the plume don’t show any sodium. If the source of the plumes were fresh water like on Earth, the plumes would contain enough detectable sodium. Fresh water flows through rocks and on streambeds, and so it picks up bits of mineral chemistry. The emerging view is that there’s not obvious evidence for a subterranean ocean in contact with rock, no boiling or venting.”

Image: Enceladus as seen by Cassini. Investigating its hot spots is again on the orbiter’s agenda in March. Credit: NASA/JPL/Space Science Institute.

We thus wind up with what is still the most obvious explanation for the plumes of Enceladus, the tides that cause crustal motion in a set of fault lines near the south pole. On its next pass, in March of this year, Cassini will go again into the plume and examine the venting area in the infrared, along with the cracks, impact craters and various fissures found in this intriguing area. We should also wind up with better measurements of the gases and vapors issuing from this activity.

The tidal motion here is interesting. Enceladus is in dynamic resonance with Dione, so that every time the more distant Dione orbits Saturn, Enceladus makes two revolutions. The continuous squeeze from Saturn does interesting things to the surface, with the temperature at the hot spot at least 100 degrees warmer than the temperature at the actual poles. And the same kind of tidal mechanisms help power Io’s volcanism and put Europa under continual forces that re-shape its surface.

The same American Geophysical Union meeting where McKinnon delivered his Enceladus presentation in December was the venue for his comment that an ocean on Europa is now considered all but a certainty. Radar sounding by a future Europa orbiter could tell us much more about the depth of the ice shell covering that body of water. So we continue to turn to the moons of the outer planets as possible sites for life, with the odds on Enceladus (never high) perhaps fading but Europa more in the picture than ever. Nor (and I hope David Grinspoon is still with us!) should we count out exotic possibilities on Titan itself.