From Mercury to Centauri B

Centauri Dreams‘ rarely spends time close to the Sun, preferring to focus on stars other than our own, and their planets. But the MESSENGER spacecraft’s close pass by Mercury, leading eventually to orbit, does have an interstellar connection in the person of project scientist Ralph McNutt, who is prominent not only in exploring the closest planet to Sol but also in planning a mission that would be our farthest yet, the Innovative Interstellar Explorer attempt to study nearby interstellar space. 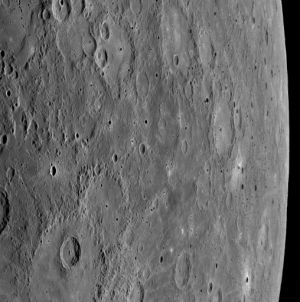 Fire and ice. McNutt (Johns Hopkins University Applied Physics Laboratory) obviously enjoys working at the extremes, and one hopes for an outcome for IIE just as successful as MESSENGER has enjoyed thus far. Meanwhile, Mercury looks more or less as expected, but don’t let that fool you. As Greg Laughlin points out at his systemic site, we’re looking at vast stretches of terrain that have never before been seen, our earlier views of Mercury having been delivered by Mariner 10 flybys that saw only parts of this world.

Image (click to enlarge): Just nine minutes after the MESSENGER spacecraft passed 200 kilometers (124 miles) above the surface of Mercury, its closest distance to the planet during the January 14, 2008 flyby, the Wide Angle Camera (WAC) on the Mercury Dual Imaging System (MDIS) snapped this image. The WAC is equipped with 11 different narrow-band filters, and this image was taken in filter 7, which is sensitive to light near the red end of the visible spectrum (750 nm). This view, also imaged through the remaining 10 WAC filters, is from the first set of images taken following MESSENGER’s closest approach to Mercury. Credit: NASA/Johns Hopkins University Applied Physics Laboratory/Carnegie Institution of Washington.

Does any of this remind you of the poignancy that accompanied the Voyager images from Neptune? In that case, we were looking at the last planetary discoveries the Voyager mission would make before the two spacecraft set forth into the outer reaches, where they still perform helpful science. In this case, we’re looking at the last rocky, ‘terrestrial’ class world we haven’t visited in our Solar System. Laughlin, always an elegant writer, catches the excitement of such discovery perfectly:

Nevertheless, we do gain something extraordinary whenever a new vista onto a terrestrial world is opened up. Galileo was the first to achieve this, when he turned his telescope to the Moon and saw its three-dimensional relief for the first time. Mariner 4 and Mariner 9 accomplished a similar feat for Mars. The Magellan spacecraft revealed the Venusian topography. And once Messenger has photographed the full surface of Mercury, there will be a profoundly significant interval before we get our next up-close view of an unmapped terrestrial planet. My guess is that it’ll be Alpha Centauri B b.

Just how significant that interval will be is, of course, unknown, for by ‘up-close,’ I assume Laughlin is talking about imagery from a probe within the Centauri system, a feat we are many decades (at least) away from achieving. Meanwhile, we do have New Horizons, taking us out to the icy worlds of Pluto and Charon and on into the Edgeworth/Kuiper belt.

Doubtless there are still surprises in the deep ranges of that belt, perhaps even a few rocky worlds displaced from inner orbits during the earliest stages of our system’s formation (see the comments on the systemic post for more). But if they are there, New Horizons is unlikely to stumble upon one, nor would it be able to view such a world closely if it did. I think Laughlin is right: Our next detailed look at an unmapped terrestrial planet will take place among the Centauri stars, unless they defy the growing odds and turn out to have no planets at all.