The Stars and the Odds

The universe so frequently sends the message that we humans are not entirely special. In fact, the notion of us as ‘privileged observers’ seemed to be dead as recently as a few years ago. Over the centuries we had learned that the Sun did not revolve around us, nor was the Sun itself the center of the cosmos, and with the understanding of its true position in a galaxy of stars, Sol became just another G-type star circled by planets. The recent ‘rare Earth’ hypothesis does challenge the idea that our planet is of a kind likely to be found elsewhere, but exoplanet discoveries will soon tell us whether or not Earth-like worlds really are common.

We may be getting used to the idea of Earth as just one of the vast billions of planets that are doubtless sprinkled through the Milky Way, but we have a long way to go in terms of our thinking about the future. For the one place where that sense of privilege seems to remain is in the idea that having achieved our planetary dominance, we are simply here to stay. The history of our planet tells a different story. Mass extinctions aren’t pretty, and new work at the University of Bristol makes the case that recovering from them can take tens of millions of years.

Three periods of extinctions occurred in the boundary between the Permian and Triassic periods some 251 million years ago, a series of ecological mega-disasters that some believe was driven by volcanism. In any case, the so-called ‘Siberian Traps’ coincide with this boundary, covering a vast area of Siberia in basaltic lava in a period of volcanic activity lasting for a million years. Ninety percent of life on the Earth disappeared, and recovery was agonizingly slow.

Sarda Sahney and Michael Benton (both at Bristol) have been studying the recovery of tetrapods, animals with a backbone and four legs. While life itself rebounded quickly after the disaster, their research shows that specialized animals involved in complex ecosystems took much longer to recover. From the paper:

Though globally tetrapods recovered quickly, the dramatic restructuring that occurred at the community level was not permanent and communities did not recover numerically or ecologically in the Early and Middle Triassic. It would not be until the great diversity of the Late Triassic, which included dinosaurs, pterosaurs, crocodilians, rauisuchids, aetosaurs, rhynchosaurs, trilophosaurs, sphenodonts, amphibians and mammals, some 30 Myr after the end-Permian event, that terrestrial tetrapod community diversity was restored. 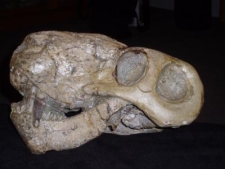 Life’s essential resilience is unquestionable, but so is the fragile nature of any specific ecological niche. The end of the Permian saw extinctions so wide-ranging that the survival of any particular species hung by a thread.

Image: The sabre-toothed Lycaenops was a top predator of the latest Permian in South Africa. Lycaenops was a gorgonopsian, one of a group of highly successful animals that dominated faunas in the Late Permian, but were wiped out, together with 90 per cent of all species, by the end-Permian mass extinction. Credit: Mike Benton, University of Bristol

A tenet of Centauri Dreams from the beginning has been that we humans must expand into the cosmos if we expect our species to survive. The Earth may never again undergo volcanism like that associated with the Permian/Triassic boundary, and perhaps the next asteroid strike won’t occur for another million years. Perhaps. Individuals might choose to play such odds, but a technological culture at the brink of expansion into its planetary system cannot. Long-term, even a relatively settled and middle-aged solar system like ours is rife with potential danger.

Unprivileged as we seem to be, let’s push into nearby space as a hedge against planetary catastrophe, a species-wide insurance policy. And if we do continue to expand, we may well wind up as Freeman Dyson has so often speculated, evolving in our own separate ways according to the ecosystems we move into. That sense of a viable future no matter how we change along the way should drive us to look at all our options, both near the Earth and gradually outward as we expand into the Orion Arm.

The paper is Sahney and Benton, “Recovery from the most profound mass extinction of all time,” in Proceedings of the Royal Society B, published online January 15, 2008 (abstract).