The Holocene: End of an Epoch?

Do technological cultures survive their growing pains? Species extinction through war or unintended environmental consequences — a cap upon the growth of civilizations — could be one solution to the Fermi question. They’re not here because they’re not there, having left ruined cities and devastated planets in their wake, just as we will. It’s a stark picture whether true or not, one that makes us ponder how the things we do with technology affect our future. Consider the question in terms of time.

The Holocene epoch, in which we live, began about 10,000 BC, incorporating early periods of human technology back to the rise of farming amd the growing use of metals. And while there has been scant time for true evolutionary change in animal and plant life during this short period, it is certainly true that extinctions of many large animals as we move from the late Pleistocene into the early Holocene have not only changed the world through which humans moved but may have been at least partially caused by human activities. Symbolic of the process are mammoths, mastodons, as well as giant sloths and saber-toothed tigers.

Even so, until recently recorded history human actions had not fundamentally changed gloabl environmental conditions. How much of an effect has our species had on the planet, and is that effect now different enough to change our terminology? Geologists at the University of Leicester, picking up on a proposal first made by chemist Paul Crutzen in 2002, now suggest that the Holocene epoch has ended. The new epoch, which they dub the Anthropocene, is the result of significant human actions. Its markers include disturbances to the carbon cycle and global termperature, ocean acidification, changes to sediment erosion and deposition, and species extinctions like those mentioned above.

The Anthropocene formally recognizes a widely perceived reality, the sharp line between the pre-industrial world and the technology-laden planet we now call home, awash with digital tools and freighted with the after-effects of industrial activity. And indeed, the cover of GSA Today (a publication of the Geological Society of America) in which this work appears makes the case rather strongly, showing the high-rise buildings of Shanghai fading out into the distance. It’s a stark reminder of how megacities like this one are transforming the planet. 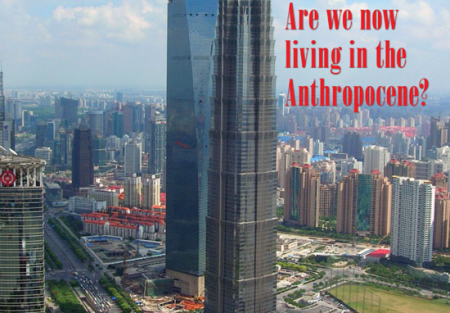 But how do you choose a marker for the onset of an epoch? Specialists call such a marker a Global Stratigraphic Section and Point, or GSSP. With China and India in the midst of their own industrial revolutions, homing in solely on Western history may not be accurate. C02 levels could be helpful, but global changes in their levels are gradual. The authors’ musing takes in a range of possibilities:

From a practical viewpoint, a globally identifiable level is provided by the global spread of radioactive isotopes created by the atomic bomb tests of the 1960s; however, this postdates the major inflection in global human activity. Perhaps the best stratigraphic marker near the beginning of the nineteenth century has a natural cause: the eruption of Mount Tambora in April 1815, which produced the “year without a summer” in the Northern Hemisphere and left a marked aerosol sulfate “spike” in ice layers in both Greenland and Antarctica and a distinct signal in the dendrochronological record…

Or perhaps, the paper continues, picking a marker at this level of detail is not necessary, as long as the realities of what Paul Crutzen argued in 2002 are acknowledged. The current global environment is dominated by human activity to the point where reconsideration of our terminology must take it into account. The rapid rise of population from the beginning of the industrial revolution in Europe and the exploitation of coal, oil and gas have fueled a planetary transformation. And note this:

The combination of extinctions, global species migrations…, and the widespread replacement of natural vegetation with agricultural monocultures is producing a distinctive contemporary biostratigraphic signal. These effects are permanent, as future evolution will take place from surviving (and frequently anthropogenically relocated) stocks.

A new epoch indeed, the case for which is made powerfully in this paper. The assumption here is that this inevitable transformation is survivable, but then Centauri Dreams is sometimes accused of excess optimism. The reference is Zalasiewicz et al., “Are we now living in the Anthropocene,” GSA Today Vol. 18, Issue 2 (February 2008), pp. 4-8 (abstract).