We always have to watch our preconceptions, an early one in the exoplanet game being that solar systems around other stars would look pretty much like our own. Then we started the whole exoplanet discovery binge by finding planets around a pulsar, of all things, and went on to the terrifically odd world of ‘hot Jupiters,’ whose existence had not been predicted by most theorists. Now we’ve gotten used to the idea that solar systems come in huge variety, but finding one that looks more or less like ours would still be comforting, and would make it seem more likely that there are other ‘Earths’ out there, perhaps teeming with life.

Today and tomorrow we look at two such finds, noting the resemblance to what we have around Sol and pondering the implications for the broader planet search. First up is not a single but a double planetary find, two worlds that inhabit a place much like that of Jupiter and Saturn in our Solar System. Not only is this an intriguing discovery in itself, but note the distance involved: We’re dealing with a system fully 5000 light years from Earth. The only method that will snare that kind of catch is gravitational microlensing, a method triumphantly vindicated by these recent findings.

Microlensing happens when a star crosses in front of a more distant star, the gravity of the nearer object magnifying the light being received from the more distant. Few examples of microlensing thus far can equal this one, which resulted in a magnification of 500 times, revealing the presence of the two planets. The planets actually orbit the nearer star, but cause their own changes to the light intensity of the more distant object. We’ve found Jupiter-class worlds with microlensing before, but the additional planet is the result of the unusual opportunity afforded by this event. Says Scott Gaudi (Ohio State University):

“This is the first time we had a high-enough magnification event where we had significant sensitivity to a second planet — and we found one. You could call it luck, but I think it might just mean that these systems are common throughout our galaxy.” 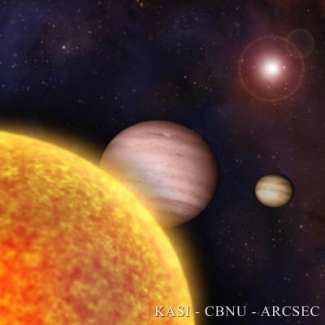 If common, such systems give credence to the idea that systems like ours may eventually start filling up our exoplanet catalogs, but do note the differences: The two worlds, assumed to be gas giants, are roughly 80 percent as big as Jupiter and Saturn, and the star they orbit is roughly half the size of Sol, releasing a mere five percent as much light as the Sun. But the similarities are also noteworthy. The smaller of the planets is twice the distance from its star as the larger (this is the case of Jupiter and Saturn in our Solar System), and the closer planetary orbits mean that the temperatures of these worlds are similar to those of Jupiter and Saturn as well.

Image: Microlensing works by using the gravity of the near star (shown at the bottom left), and its orbiting planets as a lens, magnifying light from a background star. By studying how the complex patterns of magnified light change as the near star and the two planets of the planetary system move in front of the distant star (top right), we can determine the properties of the planets and their star. Credit: KASI/CBNU/ARCSEC.

“The temperatures are important because these dictate the amount of material that is available for planet formation. Most theorists think that the biggest planet in our solar system formed at Jupiter’s location because that is the closest to the sun that ice can form. Saturn is the next biggest because it is in the next location further away, where there is less primordial material available to form planets.

“Theorists have wondered whether gas giants in other solar systems would form in the same way as ours did. This system seems to answer in the affirmative.”

But get this: Gaudi believes that next generation microlensing experiments will be able to find Solar System analogs down to the Mercury level. That means all known planets but one in our system, and would include any terrestrial worlds in the exosystem under investigation. The work grows out of observations made by the Optical Gravitational Lensing Experiment, with follow-up by the Microlensing Follow Up Network (MicroFUN), which helped to coordinate worldwide observations.

You can call this a solar system analog or a ‘scaled solar system’ (Gaudi uses both terms), though I would prefer to wait until we know more about this system before using that term. Nor do we have any way of knowing whether the optimistic thought that such systems are common will really hold. But since this is the first time microlensing has been able to operate at this level of magnification, that does mean that the first time we were able to see a potential Solar System analog with microlensing, we did. Exciting stuff, which coupled with the discovery of a close Jupiter analog (and here the word ‘analog’ really fits) that we’ll describe tomorrow points to how fast we’re moving toward detecting planetary environments not dissimilar from our own.