About two weeks ago we looked at the work of Michael Meyer (University of Arizona), whose team examined over 300 Sun-like stars (spectral types F5-K3) at mid-range infrared wavelengths. A wavelength of 24 microns detects warm dust, material at temperatures likely to be found between 1 and 5 AU from the parent star. The headline that day was Meyer’s contention that many if not most such stars produce terrestrial planets. Now Meyer is presenting these findings at the annual meeting of the American Association for the Advancement of Science, doubtless putting the exoplanet hunt back in the daily papers, at least for a day. 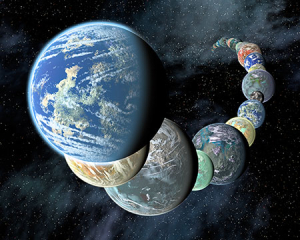 Bear in mind that in using the term ‘terrestrial’ we’re talking about small, rocky worlds like the inner planets of our Solar System. That could include worlds like our own, of course, but could also include hellish places like Mercury and Venus and their analogues around other stars. Nonetheless, it’s exciting to think that the chances of rocky planet formation are high enough to make Earth-like worlds a likely outcome around a large number of stars.

Image: This artist’s concept illustrates the idea that rocky, terrestrial worlds like the inner planets in our solar system may be plentiful, and diverse, in the universe. Credit: NASA/JPL-Caltech/R. Hurt (SSC-Caltech).

The stars surveyed by Meyer’s team were grouped by age. But does the warm dust found around ten to twenty percent of the stars in the four youngest age groups really indicate Earth-like planets? What we know is that stars older than 300 million years don’t show the kind of warm dust Meyer’s younger stars do, a possible indication that planet formation is complete. Now Thayne Currie and Scott Kenyon (Smithsonian Astrophysical Observatory) have performed a separate study on dust around ten to thirty-million year old stars, with results suggesting similar processes.

Here is the scenario: Warm dust should be detectable during planet formation because the collision of small rocky bodies in the circumstellar debris disk is building larger and larger objects, creating warm dust as the result of the activity. Says Kenyon: “Our work suggests that the warm dust Meyer and colleagues detect is a natural outcome of rocky planet formation. We predict a higher frequency of dust emission for the younger stars, just as Spitzer observes.”

So rocky planets may indeed be forming, but around what percentage of stars? The Spitzer data are susceptible to various interpretations, but if you want to shoot for the most favorable outcome for terrestrial worlds, you can look at them this way (the words are Meyer’s):

“An optimistic scenario would suggest that the biggest, most massive disks would undergo the runaway collision process first and assemble their planets quickly. That’s what we could be seeing in the youngest stars. Their disks live hard and die young, shining brightly early on, then fading. However, smaller, less massive disks will light up later. Planet formation in this case is delayed because there are fewer particles to collide with each other.”

Now we’re in the sixty-percent plus zone Meyer flagged in his original paper. But we won’t know whether that or the conservative twenty percent figure is correct without the kinds of observation the Kepler mission will shortly commence. And then there’s the Giant Magellan Telescope, scheduled for completion in 2016 at its site at Las Campanas, Chile. Remarkably, astronomers are already talking about using its seven 8.4-meter primary mirrors to image Earth-like planets from the ground. The GMT will produce images ten times sharper than the best the Hubble Space Telescope can offer, another exceptional tool that should help us snare a terrestrial world by 2020 (although I bet an M-dwarf transit bags one much sooner).

The complete Meyer reference is in our previous coverage. The Currie/Kenyon study is Currie et al., “The Rise and Fall of Debris Disks: MIPS Observations of h and chi Persei and the Evolution of Mid-IR Emission from Planet Formation,” accepted by The Astrophysical Journal and available online. This Spitzer Space Telescope news release summarizes both studies.