What exactly is that dark material spread so widely over Saturn’s various moons? From Hyperion to Iapetus, Dione and Phoebe, we find a black substance coating a wide range of objects, suggesting that whatever the stuff may be, there must be a common mechanism for moving it from one moon to another. A series of papers on Saturn’s moons appears in the February issue of Icarus, where these interactions are now under study.

Just what the material is remains a mystery. But Roger Clark (US Geological Survey) notes that as the Cassini data build, we’re beginning to track down some of its components, including bound water and, possibly, ammonia. Studying Dione, Clark’s team noted the fine-grained nature of the dark material there. Its distribution and composition indicate the dark material is not native to the moon, and indeed, the same signature appears not only among other moons but also in Saturn’s F-ring. From the abstract to the study by Clarke and colleagues: 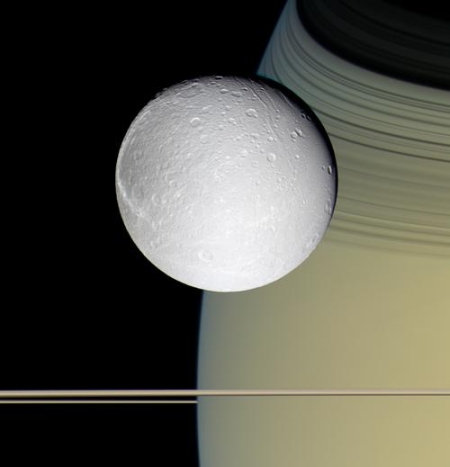 Image: Speeding toward pale, icy Dione, Cassini’s view is enriched by the tranquil gold and blue hues of Saturn in the distance. The horizontal stripes near the bottom of the image are Saturn’s rings. Images taken on Oct. 11, 2005, with blue, green and infrared (centered at 752 nanometers) spectral filters were used to create this color view, which approximates the scene as it would appear to the human eye. We have much to learn about this moon’s dark material and its interactions with the rest of the Saturn system. Credit: NASA/JPL/Space Science Institute.

So while much of our attention around Saturn has focused on Enceladus because of its icy plumes (one paper in the Icarus group discusses traces of organic compounds or silicate materials within Saturn’s E-ring, believed to be fed by those very plumes), we are now learning that the planet’s entire ‘system’ is more dynamic than believed. Dione itself, as Clark goes on to report in Icarus, shows some evidence of being geologically active.

Saturn is coming to be seen in terms of a unique ecology, as Cassini scientist Bonnie Buratti notes:

“Ecology is about your entire environment — not just one body, but how they all interact. The Saturn system is really interesting, and if you look at the surfaces of the moons, they seem to be altered in ways that aren’t intrinsic to them. There seems to be some transport in this system.”