When you’re thinking interstellar, long time frames are inescapable. Are we capable as a culture of planning missions that last not only longer than a single human lifetime, but longer than multiple generations? Steve Kilston (Ball Aerospace & Technologies), with help from Sven and Nancy Grenander, clearly thinks so. The three are behind the fittingly named Ultimate Project, a starship designed to carry one million humans across the light years separating us from the nearest stars, creating colonies and perhaps going on from there, a ten thousand year star journey that could turn into a trek through the galaxy lasting for millions more.

For just to get such a mission to the launch point, Kilston is thinking in terms of century-long segments within an overall 500-year plan. 100 years to develop the plan for the mission. 100 more years to achieve a detailed design. Now a century for prototyping and demonstrating technologies, followed by a century to assemble materials and construct the spacecraft. A final one hundred years for a shakedown cruise in the Solar System. You can see that we’re looking at societal commitments on the order of the great cathedrals of Europe, but going substantially beyond even their protracted construction in terms of time and expense. 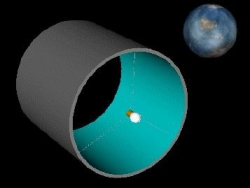 A few assumptions travel with this project. Because scientific discoveries are much harder to predict than changes in technology, the Ultimate Project assumes new technology but no new physics. And it operates with the certainty that experiments and discoveries in coming centuries will alter its plans, that experience triumphs over theory every time, and that advances en-route will continue the process of updating the plan until the mission is accomplished. I’m drawing these premises from a presentation Steve Kilston made at the second Space Mission Challenges for Information Technology conference, which provides far more background material than I can offer here.

That being said, the current daunting specs are what you might expect of an interstellar ark: A vehicle of 100 million tons, with a cost of $50 trillion, built as a cylindrical shell some two kilometers long and two kilometers in diameter, with ten or more decks of habitable space and 1 g of gravity provided by rotation. The great pyramid of Cheops has one-sixteenth the mass of this ship, which carries twice the ‘land’ area of the island of Manhattan, offering 125 square meters per person. The propulsion method: Magnetically confined deuterium/Helium-3 fusion, a technique familiar from Project Daedalus here updated and now using the atmosphere of Uranus for the necessary store of Helium-3.

Expansion plans? Count on twenty Sun-like stars within six parsecs of Earth, a range reachable within 10,000 years. Figure 2000 years to settle a new planet and build two new starships to continue the voyage. The net rate of expansion becomes one parsec every 2000 years, with the Milky Way explored in some forty million years. The Ultimate Project’s Web site is bare-bones at present and the link to the Project’s recent poster presentation at the JPL Exoplanet Fair is broken, but I assume that oversight will be repaired soon. Or perhaps not. With five hundred years to launch, the site operators may see no need to rush.

Steve Kilston has been involved with Webster Cash’s New Worlds starshade concepts and has worked at Ball Aerospace on imaging Earth-like planets around other stars. He may be an optimist in terms of the cost of the Ultimate Project and my guess is that 500 years from now the type of fusion the Project now focuses on will have been superseded, but trans-generational endeavors begin somewhere, and I know of no one else who is currently trying to do what the British Interplanetary Society once did, bringing solid scientific and engineering knowledge to bear on a complete design aimed at reaching the stars. For that reason alone, the Ultimate Project is worth keeping on your watch list.