Toscanini Through the Light Years

A friend of mine who knows more about classical music than anyone I’ve ever met, and who has turned his passion for it into a second career, asked me a question a few years ago that stays with me. A great admirer of Toscanini, he wondered whether some of the the conductor’s prodigious output was in some sense still ‘out there.’ For Toscanini went to work in New York after he left Italy, conducting the first broadcast concert of the NBC Symphony Orchestra in 1937. His NBC broadcasts were, of course, recorded, but my friend’s thoughts had turned interstellar and he wondered where those radio signals were now. 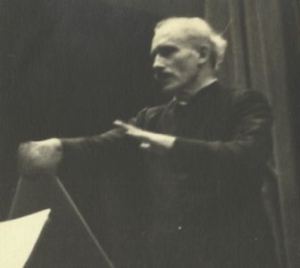 We discussed radio signals propagating outwards at the speed of light, so that a 1937 broadcast would now be 71 light years out, and in answer to his query, I said yes, if you could somehow position yourself through superluminal means 71 light years from here, you would be on the wavefront as the initial Toscanini broadcast swept over you. But, I assured him, you wouldn’t be able to hear it. For one thing, most of the radio signal, given its frequency range, would have bounced off the ionosphere and returned to Earth. What signal might have managed to leak out would have become so attenuated as to essentially fade into background noise.

Image: The great Toscanini at work. Want to hear his first 1937 NBC Symphony Orchestra concert? You’ll need to be 71 light years from Earth, and armed with some serious receiving equipment.

Or would it? The question keeps coming up because we are actively scouring the heavens looking for radio or optical signals from other civilizations. Would we actually be able to hear not just a directed beacon, but extraneous transmissions of the sort that the Toscanini broadcasts represent? Broadcasts aimed only at a local audience on a particular planet but nonetheless spreading outwards into the nearby galactic neighborhood? Opinion on this seems mixed, but an online essay by Seth Shostak makes the case that television signals may be detectible, depending on the kind of equipment being used to handle the reception.

Shostak figures that an alien civilization with an antenna farm 15 miles on a side, one that used a collection of simple rooftop antennae spaced every ten feet that hooked up to receivers no more noise-free than those we currently build for our radio telescopes, could pick up TV carrier signals from fifty light years away. A carrier is easier than any other part of the TV broadcast to pick up because the signal is more concentrated within it, and picking it up would offer priceless information.

“The carrier would tell them we’re here – that the red “on the air” sign is lit, and intelligent critters exist on planet Earth. If they found the carrier too boring, and wanted to actually watch Lucy drive Desi nuts, they’d need an antenna farm 150 times bigger in each direction. That’s a large herd of antennas, approximately the size of the United States, and probably not something you’d appreciate outside your picture window. But it’s hardly an unimaginable engineering feat, especially if the aliens are somewhat ahead of us in technical development.

Another example from the article: Arecibo’s one megawatt radar transmitter (that great, endangered instrument we need so badly in the hunt for Earth-crossing asteroids), would be receivable at 320 light years by a receiver with Arecibo-like characteristics. If this is the case, then my friend’s question is answered in a gratifying way for a man who reveres Toscanini’s memory. Yes, in some sense, the great maestro’s music still lives as the wavefront pushes inescapably outwards.

The advantage to us? Assuming a civilization roughly at the stage of development of our planet from, say, 1900 to the present, we might be able to pick up its extraneous signals with sufficiently sensitive equipment (think ‘dark side of the Moon’ in terms of receiver location, and assume advances we might expect shortly). Listening for interstellar beacons has always seemed unproductive to me because of the faint likelihood we might be chosen for such a signal, but simple by-products of normal broadcasting activities would indeed be more likely, assuming such were available and — the big ‘if’ — assuming the existence of a roughly parallel civilization within a star system in the surrounding hundred or so parsecs.

Frankly, I think the odds on that are longer than of my friend’s finding a way to travel 71 light years to listen to his Toscanini broadcasts. But the question of our ‘visibility’ to neighboring star systems is intriguing enough that I’m surprised I’m not seeing more work on it. Shostak mentions a recent TV broadcast in which a “…pundit apparently proclaimed that earthly TV broadcasts would be hopelessly scrambled after penetrating only a few light-years into space.” Does anyone have pointers to recent work on this question that I haven’t been able to track down? And as far as AM radio from the 1930s goes, am I right that a tiny bit of such broadcasts might make it through the ionosphere, or do we have to wait for the advent of FM and television signals to make that jump?