We have interesting news coming up this week with regard to the first detection of methane in the atmosphere of an exoplanet, of significance because it demonstrates that we can detect organic molecules using spectroscopy in ways that will one day help us study the atmospheres of terrestrial worlds around other stars. More on this later in the week, after a NASA teleconference scheduled for the 19th. Today, though, let’s talk about another kind of detection in the circumstellar disk of a young star.

At work in the latter is the Spitzer Space Telescope‘s infrared spectrograph, which is being put to use to look at the composition of protoplanetary disks. Specifically, John Carr (Naval Research Laboratory) and Joan Najita (National Optical Astronomy Observatory, Tucson) have been examining gases in the planet forming region around the star AA Tauri, using refined methods that have allowed them to find the spectral signatures of three organic molecules: Hydrogen cyanide, acetylene and carbon dioxide, along with water vapor. Of some significance is the fact that these organics are more plentiful in the disk than in the cloud of interstellar gas from which the disk itself was formed. Says Carr:

“Molecular clouds provide the raw material from which the protoplanetary disks are created. So this is evidence for an active organic chemistry going on within the disk, forming and enhancing these molecules…Now that we can identify these molecules and inventory them, we will have a better understanding of the origins and evolution of the basic building blocks of life — where they come from and how they evolve.” 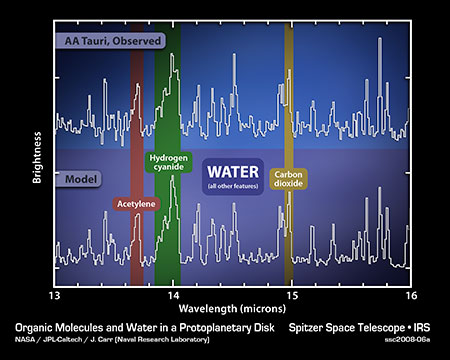 Image: This plot of infrared data shows the signatures of water vapor and simple organic molecules in the disk of gas and dust surrounding a young star. The data on the top line were captured by NASA’s Spitzer Space Telescope’s spectrograph, which collects light and sorts it according to color, or wavelength. In this case, infrared light from gases around the star AA Tauri was broken up into the wavelengths listed on the horizontal axis of the plot. The sharp spikes are called spectral lines, and each molecule has its own unique pattern, much like a fingerprint. The pattern of spikes reveals the signature of water vapor along with carbon dioxide, hydrogen cyanide, and acetylene–some of the basic building blocks of life. Credit: NASA/JPL-Caltech/Naval Research Laboratory.

450 light years from Earth, AA Tauri is thought to be less than a million years old. Carr and Najita are studying the region within three AU of the star, with results suggesting that water vapor is abundant in the inner part of the protoplanetary disk, which is where terrestrial planets may one day form. Meanwhile, a team at the California Institute of Technology has used Spitzer to examine two young stars, following up their observations with data from the Keck II telescope in Hawaii. Of that recently published work, Geoffrey Blake (Caltech) has this to say:

“While we don’t detect nearly as much water as exists in the oceans on Earth, we see essentially only the disk’s surface, so the implication is that the water is quite abundant. This is a much larger story than just one or two disks. Spitzer can efficiently measure these water signatures in many objects, so this is just the beginning of what we will learn.”

Thus the composition of planet-forming disks comes into greater focus in ways that may help us understand life’s potential for development. The AA Tauri paper is Carr and Najita, “Organic Molecules and Water in the Planet Formation Region of Young Circumstellar Disks,” Science Vol. 319. no. 5869 (14 March 2008), pp. 1504-1506 (abstract). The Caltech work, which has focused on the T Tauri stars AS 205A and DR Tau, is Salyk et al., “H2O and OH gas in the terrestrial planet-forming zones of protoplanetary disks,” slated to appear in the March 20 Astrophysical Journal (abstract).

Next post: If the Phone Doesn’t Ring, It’s Me